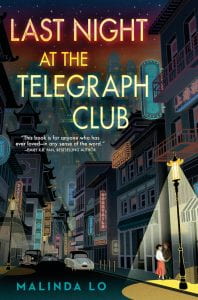 Lily Hu has always been the ideal Chinese-American girl: She does well in school, she has nice Chinese-American friends, and she never disobeys her parents. She never stands out except that she wants a career in space – not appropriate for a young lady in the 1950s. And lately, there is something else stirring inside her that Lily can’t quite put her finger on, but she knows it will not please her parents. At school, Lily starts hanging out with Kath, a fellow aviation enthusiast. After seeing an enticing ad in the newspaper, Lily desperately wants to go to the Telegraph Club, a nightclub in San Francisco that features a singer by the name of Tommy Andrews. Tommy is a female performer who impersonates a man on stage, and while Lily doesn’t quite understand what this means, she is intrigued. Kath has visited the nightclub before, so she and Lily sneak out to watch Tommy perform at the Telegraph. After a few late night visits, her relationship with Kath grows much deeper. Lily realizes what was stirring in her all along: She is a lesbian, and she loves Kath. Lily does not want to hide who she is, but she must figure out how her new, true identity coincides with the identity her parents have wanted for her since birth.

THOUGHTS: Malinda Lo’s novel has many intricate layers to it. In the 1950s, many Chinese-Americans were forced to denounce Communism or risk deportation. At the same time, many young ladies were trying to figure out if there was more to life after high school than marriage and children. These events are happening in the background of Lily’s story along with the discovery of her LGBTQ identity, a taboo topic in the 50s. The events in this novel circle around the stigma of bucking against conventional society, and this still rings true even 70 years later. A must-have for high school libraries. 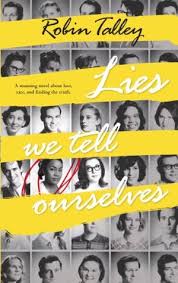 Sarah Dunbar is one of the first black students to integrate a small Virginian high school in 1959.  Sarah, who had previously been an honors student at her old high school, is placed into remedial classes for no other reason than the color of her skin.  Alternating chapters throughout the book are told from Sarah’s perspective and from a white privileged classmate, Linda Hairston.  Each chapter’s title is a lie that either Sarah or Linda tells herself as a way to deal with topical issues of racism, sexism, gender, homosexuality, and child abuse.  Forced to work together on a school project, the two young women must face the realities of race, power, and how they really feel about each other.  Talley could have written a simple story about desegregation in the South but digs deeper into interracial and homosexual relationships during a time period where both were not only not widely accepted but in many instances illegal.

I really enjoyed this complicated story of friendship and redemption set against the backdrop of 1950’s Virginia.  Talley offers no easy answers or happy endings for her characters but instead examines the traits both good and bad in all of us.  This coming of age story gives a glimpse inside the mind of a teenage girl who has suffered abuse but is not just a victim.  The story although set in a different decade will appeal to teens seeking characters they can relate to who are also struggling with their identities.