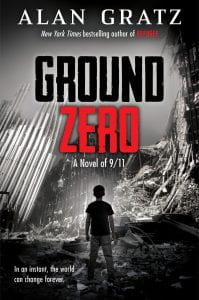 Brandon, 9 years old, suspended from school for fighting, is spending the day with his father, who works at the Windows on the World Restaurant at the top of the World Trade Center. He sneaks away from his dad to run an errand when a plane flies into the building. It is September 11, 2001. Brandon’s life has changed forever. Decades later, and a world away, Reshmina, a young Afghan girl, also lives with the fallout of that horrific day. Life in rural Afghanistan changed drastically when the US armed forces came to push back the Taliban. While no one likes the American soldiers, most Afghans fear the Taliban as well. Alan Gratz’s take on the 9/11, attack follows the two young people, alternating between their stories. While Brandon fights for his life as he tries to escape the burning tower, Reshmina struggles with the burden of Pashtunwali, providing aid to those who request it. Reshmina comes across an American soldier injured during a Taliban ambush. Despite her hatred of the Americans, she cannot leave him to die after he asks for help. The move places her family in danger; her twin brother has begun working with the Taliban and threatens to notify them of the soldier’s presence at their home. It won’t surprise any reader that the soldier is Brandon, 18 years later. There is nothing subtle about this book. Gratz had a point to make, and he hammers it home. The two stories aren’t just parallel, but painfully structured to be identical stories – an event in one story is mirrored by a similar event in the other narrative. And Gratz does not couch his opinion that everything the US did in Afghanistan was wrong and hurtful. While the current generation of readers looks for books set around 9/11, Gratz, a master of historical fiction adventure, who single handedly has converted young readers to historical fiction fans, falls a bit flat with this story. Gratz fans will want to read it, but it will not replace gems like Refugee or Projekt 1065.

THOUGHTS: Purchase where Alan Gratz is popular, but readers may be disappointed.