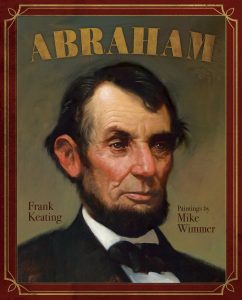 This picture book biography about Abraham Lincoln is not so much a book that details all his accomplishments, but instead gives the reader insight into his character, aspirations and beliefs.  Keating begins by listing some of Lincoln’s titles, such as “Honest Abe” and “Great Emancipator.” He takes us from Lincoln’s humble beginnings through his presidency, although his assassination is not mentioned. The author discusses how the president valued education and books and that honesty was a guiding principle in his life.  Lincoln’s own quotations are peppered throughout the text.   Mike Wimmer’s full bleed illustrations accompany each page of text and are done in oil on canvas.  His illustration of Lincoln’s statue is stunning, as it appears to gleam in the sunlight.  The full text of the Gettysburg Address is included at the end.  In the author’s note, Keating states that “Abraham Lincoln was an affirmation of the…call of the Declaration of Independence that all men were created equal.”  The author includes a list of his resources.   THOUGHTS:  Although the book does not contain enough information for reports, this appealing biography works well as read aloud and will interest children who wish to know more about our sixteenth president.  This book is part of the Mount Rushmore Presidential series, which also includes Theodore and George. 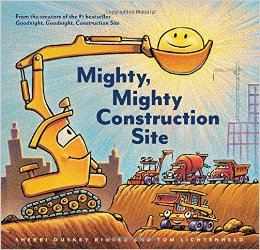 In this sequel to Goodnight, Goodnight, Construction Site, the heavy equipment trucks are back, and they’re ready to tackle their largest project yet! Crane Truck, Dump Truck, Cement Mixer, Bulldozer, and Excavator see the blueprints for their newest project, and they know they’re going to need some help. Cement Mixer honks his horn, and five new trucks come rolling down the road. With the help of Skid Steer, Backhoe, Flatbed Truck, Front-end Loader, and Pumper Truck, the crew pushes dirt, blasts rocks, digs trenches, lays pipes, lifts beams, delivers materials, hauls rubble, and pours foundations. Teamwork is the name of the game, and each truck has an important role to play in completing the project. Rhyming verse and colorful oil pastel illustrations ensure that this is a story construction-fans will return to again and again.   THOUGHTS:  This title will shine during a construction-themed storytime, and it can also be used to promote the benefits of teamwork. 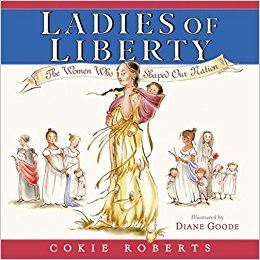 This title highlights female reformers, writers, activists, explorers, educators, and orators who made their mark during the late eighteenth and early nineteenth centuries. The collection features double-page spreads highlighting the accomplishments of ten women, including Lucy Terry Prince, Sacagawea, Martha Jefferson Randolph, Elizabeth Bayley Seton, Elizabeth Kortright Monroe, and Louisa Catherine Adams. Smaller biographical sketches also outline the contributions of women such as Eliza Hamilton, Lucretia Mott, Hannah Foster, and Margaret Dwight. Many of these women worked tirelessly to ensure the freedoms of all of our nation’s people, including women, orphans, and people of diverse faiths, were protected. Sepia-toned pen and ink illustrations by Caldecott Honor-winner Diane Goode lend a period-touch to the pages. Although the information presented is not detailed enough for in-depth research, this book serves as an easily-accessible introduction to some of America’s earliest feminists who strove to make our country a better place for all of its people.  THOUGHTS: This book can be used to in conjunction with American history units about the Founding Fathers and Westward Expansion. It can also serve as a jumping-off point for biographical projects centering around these diverse women. This is the sort of book that teachers could use to highlight one woman each week, or they could focus solely on one or two women who tie in to their current curricular study. 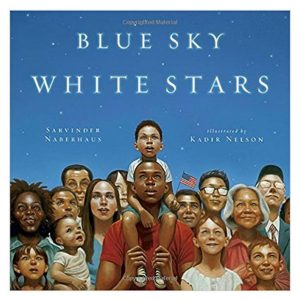 Defining America in broad terms can be a challenge for adults as well as students. One symbol that inevitably brings us together is the stars and stripes of the USA flag. This book is a vision of inclusivity using the pieces of the flag to bring out a greater message of the whole country. Naberhaus uses subtle homophones like “Sew together Won nation” with “So together One nation.” as well as phrases and homographs that carry dual meanings of importance. The ever skilled illustrations of Kadir Nelson bring the sparse words to life with diversity and patriotism. The parallels that this team bring to the work are relevant and rousing to our country’s past, present, and future aspirations. THOUGHTS: The discussions that I look forward to having with students around this book are hopefully around the way text and illustration can partner to carry meaning. The connections that I hope students make are hopefully about diversity, unity, and acceptance in a time when we need to emphasize these traits more than ever. This timely book quickly captured my heart and head. 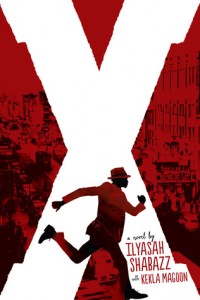 Much has been written about this fictional account of Malcolm X’s early life, co-written by his daughter, Ilyasah Shabazz, and recently recognized as a 2016 Coretta Scott King Author Honor Book. One reason for this book’s appeal is the powerful way in which it is written, from young Malcolm Little’s perspective as a twenty-something year old looking back at his childhood, his parents’ influence, and his journeys, literally and figuratively, ferrying between Lansing, Boston and Harlem. The texture of life in the segregated 1930s and 1940s is tangible and disturbingly so. Malcolm’s early life, in which he resorts to working as a messenger for a numbers runner, drinking, taking drugs, and avoiding arrest, is not celebrated; it does, however, provide essential context for the events that occurred in Malcom’s adult life, and while his parents preached his ability to become anything he desired, these tumultuous early years did in fact form the foundation for his influence later on. THOUGHTS: Winner of the 2016 NAACP Image Award for Outstanding Literary Work for Youth/Teens and a 2016 Coretta Scott King Author Honor Book, this is a highly recommended and a must-have title for middle and high school libraries. 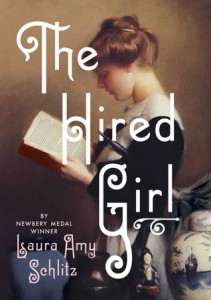 In 1911, fourteen-year old Joan works tirelessly to appease her father and three brothers on their small family farm. Since her mother passed away, Joan has taken on all the household chores, and it seems the work will never end. Her cruel father doesn’t allow Joan any small luxuries; she’s not allowed to read, go to school, or even have visitors, and Joan wonders if her life will ever be anything but hard work and labor. Devastated after her father burns her secret stash of books, Joan runs away with nothing but a suitcase and the money her mother left her secretly sewn into her childhood doll. Joan heads to Baltimore, and a chance encounter leads her to live with and work for the Rosenbach family. Going by Janet, and insisting that she’s 18-years old, Joan finds herself cooking and cleaning, but also earning a wage of six dollars a week. Raised in the Catholic faith, Joan finds that working for a strict Jewish family to be both tiring and enlightening, especially as she works hard to hide her age and an affection for one of the Rosebach sons. Written as a diary, readers will find Joan a compassionate and relatable character, even if she seems a bit immature.  THOUGHTS: A worthwhile historical story, but younger readers might be deterred by the hefty size of this 388 page book.