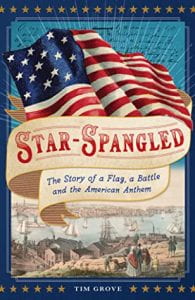 Most Americans are familiar with the tune and opening stanza of “The Star-Spangled Banner.” However, the details behind the actual flag and circumstances that inspired the creation of the anthem are not as well known. Author Tim Grove aims to inform secondary readers about these events in Star-Spangled. Readers are transported to the early republic and the busy port city of Baltimore, home to large shipbuilding and trading industries. Baltimore was also the home of seamstress Mary Pickersgill, who was commissioned to create a large flag to be flown over Fort McHenry near the entrance to Baltimore Harbor. The shipbuilding industry led to the city being a prime target for the British during the War of 1812. Grove traces the causes of the war and events leading to the planned assault on Baltimore by British forces in September 1814. Key military leaders and strategies (both the Americans and the British) are also outlined. The experiences of lawyer Francis Scott Key aboard a British ship during the battle where he was a witness to the bombardment of Fort McHenry are of course a key part of the title. Following the battle, Key drew inspiration from his experiences to pen what we now know as “The Star-Spangled Banner.” The text is accompanied by numerous illustrations, including maps, paintings, and photographs. A timeline and glossary are also included.

THOUGHTS: This well-researched title offers a worthwhile examination of a key event in United States history. Readers will be on the edge of their seats as they follow the events surrounding the Battle of Baltimore. Recommended for history fans and/or student researchers.