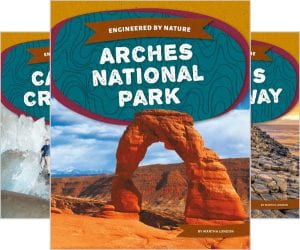 These STEM oriented books focus on natural wonders and how they were formed. In Cave of Crystals, the author discusses this little known place in Mexico. Discovered by a mining company under the Sierra de Naica Mountains in the year 2000, the cave is just about as deep as the Eiffel Tower is tall. Once the water was pumped out, miners were surprised to see giant selenite crystals, some 36 feet tall. The largest of the interconnecting caverns is called Cave of Crystals. The author describes how these crystals were formed, what the conditions were like inside the cave, and which microorganisms lived inside the crystals. This natural wonder was only seen by scientists and is no longer accessible because the water is no longer being pumped out. The text contains a glossary, index, table of contents, map, and suggested resources. QR codes take readers to websites that contain teacher resources, as well as a site for children. There is also a quote from a scientist, which is labeled a primary source. The photographs are striking, especially the one that shows the size of the crystals compared with a human.

THOUGHTS: This series will appeal to those budding earth scientists. Although it is short with simple text, there is enough information for reports. Good resources for elementary STEM units.