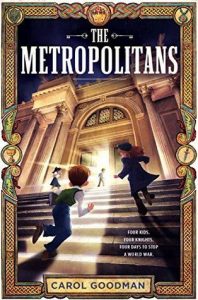 Madge wanders into the Metropolitan Museum of Art one morning after she is kicked out of her apartment by her aunt. Joe, a Mohawk boy, follows her into the museum after she shares her sandwich with him. In the museum, Madge and Joe meet Walt, a Jewish refugee from France, and Kiko, a Japanese-American girl whose father works at the museum. After the teens witness the theft of a rare Arthurian manuscript, they discover they have had the same foreboding dream, and the manuscript theft is just a catalyst for far larger evil. At first glance, The Metropolitans looks like a classic tween mystery. But the plot covers a lot of territory: Arthurian legend, treatment of Native American children (Joe is forced from his home into a brutal Indian school), and prejudice against Japanese Americans at the start of WWII. Laced with code breaking and channeling characters from Arthurian Legend, this story never slows down, as the four children rush to avoid the bombing of Manhattan.  THOUGHTS:  Of course this book brings to mind The Mixed Up Files of Mrs. Basil E. Frankweiler.  This time, however, the venerable museum is at the center of a Nazi plot to bomb Manhattan. The four youths gain a firsthand understanding of war and prejudice as they desperately try to decipher what is happening around them. 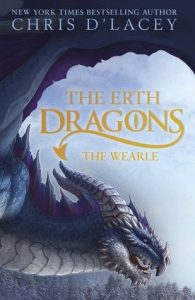 Hurray! Chris D’Lacey has a new series about dragons. Dragons inhabiting the planet Kimera sent an exploratory group to Earth but lost contact with them. A second group has been sent to determine the fate of the first dragons. This group has established a tenuous cohabitation with the humans in the area they have settled, but after a human who violates the boundary between human and dragon land is killed by the dragons, the humans goad the dragons into war. Ren, a young human boy is fascinated by the dragons and discovers a way to infiltrate dragon territory without being detected by the dragons. Caught in dragon territory when the war begins, Ren befriends Gabriel, a young dragon in disgrace with the colony. Ren discovers he understands the dragon, and the pair set out to discover the source of erratic dragon behavior which is fueling the dragon/homm (human) conflict. THOUGHTS: Fans of the Wings of Fire series will love this complex dragon world. 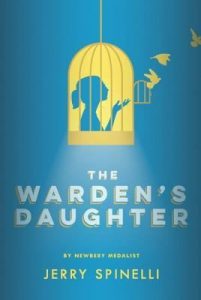 Cammie is the warden’s daughter. Her father is the benevolent warden at a women’s prison outside Philadelphia, and she lives with him in an apartment overlooking the exercise yard. Cammie’s mother was killed when she was a baby and living with her father has always been enough. Until the summer of 1959, when Cammie is turning thirteen, and the impact of not having a mother hits home. Cammie decides to make Eloda Pupko, the prison trustee inmate who watches over Cammie and takes care of the apartment, her surrogate mother. The harder Cammie pushes and acts out, desperate to hear words a mother would say, the more Eloda seems determined to keep her distance, until Cammie explodes, and Eloda finally forces the girl to face her mother’s death. Set against a background of rock and roll, American Bandstand, and the finely limned inmates, this story quietly sneaks up on you until the tears are rolling down your cheek. THOUGHTS:  Another masterful book from Spinelli. It may require a thoughtful reader to appreciate the nuances of character, but it is a beautiful story.  Historical Fiction       Nancy Nadig, Penn Manor SD 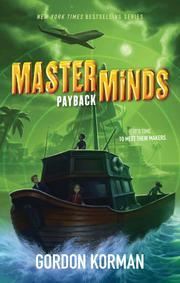 In the third and final book of the Masterminds trilogy, Eli, Tori, Amber, and Malik are still on the run from the evil Dr. Hammerstrom and their former “parents” of Project Osiris. This project, a science experiment with dubious moral value, intended to answer the nature vs. nurture debate once and for all by cloning child versions of criminal masterminds of all kinds–thieves, terrorists, killers, computer hackers, and more–and raising them in a seemingly perfect community free of influence from the outside world to see if the child clones would turn into productive, honest adults or if they would follow in the footsteps of the people who provided their DNA. It sounds very dark, but Korman does a good job of writing the series at child-appropriate level. The four kids who escaped Project Osiris want to free the rest of the kids who don’t know the truth about their origins, so they travel around the country looking for help and answers from different adults while doing what they need to in order to survive, including living in a GIrl Scout cookie warehouse and stealing a few cars along the way. The series ends with Eli, Tori, Amber, and Malik at a tropical beach resort in a showdown with Dr. Hammerstrom and a satisfying ending. THOUGHTS: A great action adventure series for upper elementary students who can handle and understand the nature vs. nurture concept.