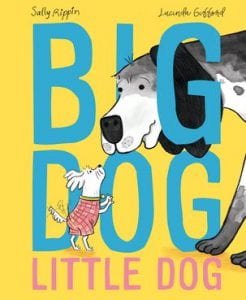 With a great friend and a lot of attention, Big Dog enjoys a great life with his person. But sometimes the days can be long and lonely. One day while on a walk, Big Dog and his friend meet another person with a little dog. Then things begin to change. Little Dog and her person move in with Big Dog and his person, and Little Dog doesn’t seem to understand how anything works. Big Dog decides Little Dog needs to go, so he begins to sabotage Little Dog to show their people just how annoying Little Dog is. When Big Dog goes too far and is sent outside for the night, Big Dog realizes he and Little Dog may not be so different. Beautiful watercolor illustrations enhance this story of dealing with life’s changes. Children will adore the dogs and root for them to learn to like each other.

THOUGHTS: Big Dog, Little Dog is great for a lesson on how friends can have big differences. Hand this title to a child who is getting a new sibling or going through a change in family situation. Highly recommended for elementary collections. Note: This title originally was published in Australia in 2021. 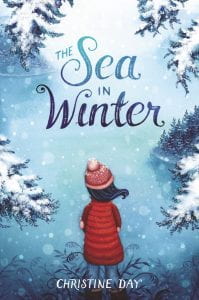 Seventh grader Maisie isn’t having a great day just before her school’s midwinter break. She’s tardy to homeroom, and she earned a 70 on her most recent math test. A break from school and a family trip back home will be good “heart medicine.” Maisie could use a distraction from eating lunch alone and getting text updates from her ballet friends who she no sees. Maisie isn’t sure how to respond, so she usually doesn’t. Things start to look up when her physical therapist suggests that Maisie’s recovery from a torn ACL and surgery might be moving faster than initially anticipated. This news gives Maisie hope; she’s missed ballet and her friends so much, and she might even be able to make a few spring auditions if she keeps progressing. With this news (and a green light for hiking) Maisie’s family heads to the Olympic Peninsula to explore some areas that are important to their Native family. Maisie’s stormy emotions seem to get the best of her at times, and she’s not sure why she says some of the things she does. When Maisie’s frustration reaches a peak, she’ll have to decide who she wants to be, even if that doesn’t include ballet.

THOUGHTS: Upper elementary and middle school students will adore Maisie and recognize the roller coaster of emotions she experiences. Maisie’s little brother provides comic relief to some of her emotional “funks,” and her parents are extremely supportive. #OwnVoices author Day addresses negative self talk and depression in an age appropriate way that will resonate with students. Highly recommended.

Maise Cannon is many things: a middle schooler, a sister, a daughter, a Native American descended from the Makah and Piscataway tribes, and a ballet dancer. Her favorite of all her identities is of a ballet dancer, but her knee injury that she is recovering from may prevent her from ever dancing again. Her physical therapy is going well, and she hopes that she will be able to audition for a summer program like her friends. When her family goes on a hiking trip, Maisie re-injures her knee dashing any hopes of dancing any time soon. Maisie’s anxiety and depression take hold of her, and she shuts out everyone and everything in her life. Her family encourages Maisie to go to therapy. After a few months, Maisie finds a life for herself without dancing, and finds that she can be happy with what she CAN do.

THOUGHTS: This is a story where the characters just happen to be Native Americans. This would be a great addition for readers who are struggling with an injury.

Now that we’re back to school, it’s time to get back to blogging.  We hope everyone had a relaxing summer full of great books; we know we did!

Now, onto the important stuff…reviews! 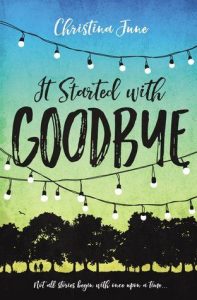 Tatum is such a likeable character who, through circumstances she couldn’t predict, ends up in quite a bit of trouble (involving the police). With her father leaving on business for the summer, he defers to her “stepmonster” to oversee Tatum’s discipline. Basically, this leaves her working through hard labor, outdoor (in the hot summer sun) community service and no life to speak of. The novel is an interesting play on the Cinderella story; however, because of Tatum’s step-Abeula, she comes to understand, if not appreciate, the strict discipline her stepmother Belén dishes out. The novel has a wonderful flow and a nice variety of characters that would interest many different readers. THOUGHTS: Overall, It Started with Goodbye has a neat and tidy end, but with the summer Tatum had, she deserves it! 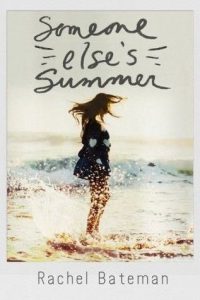 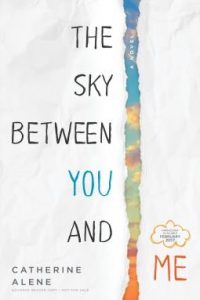 Alene does a great job of showing how one simple comment – you may want to consider a larger saddle – can change someone’s life. Still dealing with the grief over her mother’s death years ago, Raesha uses her mother’s saddle, and when her best friend suggests she’s outgrown it lighter, leaner, faster becomes Rae’s mantra. Though her lack of eating is clearly spiraling out of control, no one – her boyfriend, best friend, or father – broach the subject until it’s almost too late. THOUGHTS: Rae’s anorexic thoughts as she loses control are very powerful in this verse-style novel. 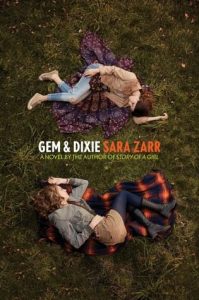 For as long as she can remember, the only constant in Gem’s life has been her younger sister, Dixie.  Their father left when Gem was only 14 years old, and their mother is unreliable, often coming home drunk or on drugs.  Now, 17-year-old Gem’s father suddenly reappears and wants to be a part of their lives again.  Gem, however, has had enough.  When she and Dixie find a bag of cash that their dad hid in their bedroom, Gem sees an opportunity to leave for good.  What she doesn’t realize though, is that she will ultimately have to choose between Dixie and starting anew.  A touching portrait of the lasting bond between sisters, this title will be a hit with fans of Sarah Dessen, Jandy Nelson, and Jenny Han.  THOUGHTS: Sara Zarr definitely pulls at the heartstrings in her newest release; the entire time I was reading the book, I just wanted for Gem’s parents to magically change and give her the kind of loving home every child deserves.  Beautifully written, but probably best suited for mature audiences, as the f-word was used a handful of times, and there was plenty of discussion about drug use as well as a scene with underage drinking.