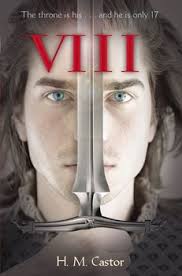 King Henry VIII was one of the most notorious kings in all of British history.  From a young age, Hal was viewed by his father, King Henry VII, as weak and coddled by his mother, Elizabeth of York.  His grandmother resented him and his mother, since the throne of Henry VII actually belonged to Elizabeth of York.  His older brother, Arthur, looked down upon him because he, Arthur, would be king, and Hal would only inherit the title of Duke of York.  And although Hal was a bit smaller and much younger than Arthur, he had a drive and conviction that would turn him into the king he would become all because of a prophecy, heard at a young age, that the Duke of York would one day be King.  A prophecy that remained in the back of Hal’s mind as he grew in the shadows of his family.  H.M. Castor masterfully captures the struggles of King Henry VIII’s early life that lead him to become the most infamous King of England and began the demise of the Tudor Dynasty.

VIII is a fabulous look at the early life of King Henry VIII.  It provides readers with a masterful portrayal of how one king could cause so much destruction and demise and become a notorious leader, all because of his family.  It is a fabulous TV tie-in novel to the series, Reign, on the CW, because it establishes the history of the Tudor dynasty prior to the struggle for power between Mary, Queen of Scots, the rightful monarch, and Henry VIII’s illegitimate daughter, Elizabeth.  Students interested in the show will love this novel because it establishes where Reign begins and includes many references viewers and readers will recognize.  As a fan of The Tudors, I loved this novel because it established the violent and disreputable figure that was King Henry VIII, but also provided a story of a young man, Hal, with love in his heart, but cruelty surrounding him.  This is a great novel for British history courses to connect back to PA Core literary and informational reading, not only for the quick read and interesting read it is, but to establish more background about the Tudor family and how they gained power.  I cannot wait for Castor’s next book (or more, hopefully) about Queen Mary I (Bloody Mary) and Elizabeth I.