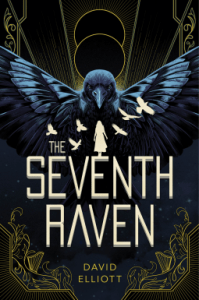 Jack and Jane have prayed and prayed for a daughter but to no avail. Their six sons, all named Jack, are rough-and-tumble boys while Robyn, their seventh son, is a gentler soul. When Jane finally gives birth to a daughter, they realize quickly she is sick and will not survive the night. The father in his anger curses aloud that all of his sons are no better than birds. The universe magically heeds his words, and all seven boys are transformed into ravens, and in exchange, the little girl, later named April, lives. While the eldest six sons are infuriated over their new fate, Robyn feels as if he has finally found where he belongs. Fifteen years later, April feels as if a dark shadow lurks over her and has for her entire life. Upon discovering the truth about her brother from her parents, she sets out to find her feathered family members and release them from the curse, no matter the cost.

THOUGHTS: In this interpretation of the Grimm Brothers’ “The Seven Ravens,” David Elliot delights readers with his poetic writing. Each character in the book is narrated through a different form of complex poetry which adds a lyrical element to this complicated story of human emotion and moral dilemmas. Although this book is recommended for grades 6 and up, the complexity of poetry would lend itself better to older, more advanced readers.