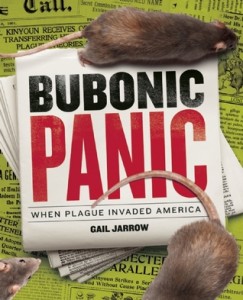 Jarrow, Gail. Bubonic Panic: When Plague Invaded America. Honesdale, PA: Calkins Creek, 2016. 978-162091-7381. $18.95. 197 pp. Gr. 6-12.
First recorded in the year 542 A.D., bubonic plague has resulted in decimations of cities and countless gruesome deaths by “buboes,” large lumps beneath the skin.  Jarrow tracks the disease from its first recorded history and explains the disturbing differences in bubonic, septicemic, and pneumonic plague.  Each was ugly and deadly for at least 40 to 60 percent of victims.  It infected rich, poor, humans and animals and was widely feared.  It came to be associated with rats, though it took until 1898 for two men (Masanori Ogata in Japan, and Paul-Louis Simond of France) to discover separately that rats’ fleas were spreading the disease.  Still, they were dismissed.  A vaccine and serum could help to prevent and cure it, but nothing had stopped the spread of the disease.

In 1899 the disease hit Honolulu, in Chinatown.  With its horrific background, it is no surprise that Surgeon General Walter Wyman feared bubonic plague would reach the mainland.  And in 1900, in San Francisco’s Chinatown, the disease arrived.   “Disinfect. Isolate.  Quarantine.”  This process was repeated amid public uproar claiming discrimination or “plague rumor.”  Bacteriologist Joseph Kinyoun served as quarantine officer for the city, and soon, as the scapegoat for a mayor and residents unwilling to sacrifice their business and trade.  But how could a disease be stopped in a city unwilling to believe it?  Excellent in layout and in use of photographs and primary sources, this book includes thorough FAQs, glossary, index, timeline, author’s note and source notes.  THOUGHTS: Jarrow painstakingly follows the disease’s history in a suspenseful story.  This is a fantastic end to Jarrow’s trio of Deadly Disease books; see Red Madness (2014) and Fatal Fever (2015).  The trilogy could be used in health classes and history courses to discuss medical tracking and management of a disease as well as its social consequences.  Bubonic Panic also weaves well into investigations of the 1906 San Fransisco earthquake and comparisons with the city’s 1989 earthquake.
614.5 Diseases        Melissa Scott, Shenango High School 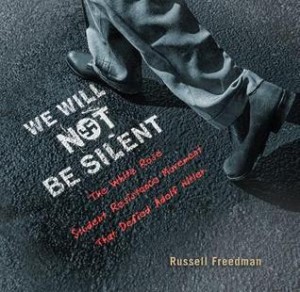 Freedman, Russell. We Will Not Be Silent: The White Rose Student Resistance Movement That Defied Adolf Hitler. New York: Clarion Books, 2016. 978-544-223790. $17.99. 104 pp. Gr. 5-12.
Freedman presents a comprehensive look at Hans and Sophie Schloss, two university students in Munich, who fought against the changes of the Nazi regime and paid for it with their lives.  By creating and distributing anti-Nazi leaflets and leading a group known as the White Rose, the pair spread a dissenting view in an increasingly dangerous time.  “We are your bad conscience” they titled one pamphlet targeting Hitler (46).  In powerfully written prose, Freedman communicates the Scholls’ much-deserved hero status.  Chief interrogator Robert Mohr, himself a Nazi, wrote that “Sophie and Hans Scholl managed a bearing that must be called unique…[They] were convinced that their sacrifice was not in vain” (72).  Accompanying photos provide insight into their personal lives and the difficult political and social environment they faced.  Today in Munich, a memorial for the two lies near a museum for the White Rose.  This is a superb addition to the literature of World War II and the Holocaust.  It includes source notes, a bibliography, and index.  THOUGHTS: Though the actions are grim, the message of freedom is overwhelming to the reader, allowing this to be used by middle and high school students.  Its short length (87 pages of text) and copious use of well-captioned photos draw in readers.  This pairs well with non-fiction or fiction about the Holocaust and World War II (one teacher is pairing it with The Book Thief in our 7th grade Advanced Reading course). It could also be used in conjunction with other books about the resistance movement, notably Philip Hoose’s The Boys Who Challenged Hitler (2015) and Deborah Hopkinson’s anthology Courage and Defiance (2015).  This is sobering and encouraging reading.
943 World War II     Melissa Scott, Shenango High School