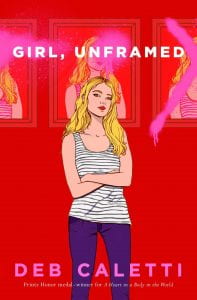 Can you imagine if your mom was famous? Like moviestar-famous? Sydney doesn’t usually have to deal with her mom and her drama, but she’s going to visit her for the summer. Before setting eyes on her mom, the newest man in Lila’s life picks Sydney up from the airport, and it’s all downhill from there. From shady art dealings to rejected credit cards, Sydney misses her friends from home. Luckily, she befriends a guy working construction next door because shady art dealings quickly become the least of their worries. It’s as if Lila’s movie script has come to life, but crimes of passion are still crimes.

THOUGHTS: There is a lot of heaviness to unpack in this story, from women who prioritize beauty over motherhood and men treating women like objects, not to mention murder. A good addition for high school libraries looking for YA thrillers that are also coming of age stories. 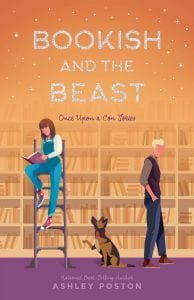 Poston continues her delightful, fairy tale based Once Upon a Con series with a reworking of Beauty and the Beast to which Belle would give her stamp of approval. In the “no good deed goes unpunished” category, high school senior Rosie Thorne attempts to return a run-away dog with disastrous results. Following the dog into an apparently vacant house, she discovers a swoon–worthy library, filled with the books of the Starfield space saga universe, the very books her recently deceased mother read to her growing up. When Rosie is startled by another individual in the house she attempts to flee, accidentally dropping a rare first-edition in the pool. Sopping wet, Rosie learns the house is currently occupied by Starfield bad-boy actor Vance Reigns, serving a parental imposed timeout from his celebrity antics. She is now on the hook to organize the library, with the assistance of the self-absorbed star, to work off her debt. As if Vance Reigns would deign to dirty his hands working with books. But as any bibliophile knows, books have a magic all their own, and surely some magic will happen between the book-loving beauty with the mousy brown hair and the gorgeous guy hiding behind a beastly bad-boy persona. The book is populated with an appealing supporting cast of diverse characters, including Rosie’s bisexual librarian father and a gender-fluid best friend, and in a sop to series fans, Poston offers a few brief appearances by characters from the previous two novels. The Gaston plotline does double duty emphasizing that in the relationship world No should always mean No. While the plot is grounded in the Starfield Excelsi-Con world of the previous two books, the Con plays only a minor role this time, which should open the book to a wider romance audience.

THOUGHTS:  A thoroughly delightfully romp through Beauty and the Beast. Rosie is independent, feisty, and sweet, and while she deserves her happily-ever-after, she would have been OK without it. A solid purchase for collections where romance and fairy tale rewrites are popular, as well as an addition to LGBTQ+ collections.