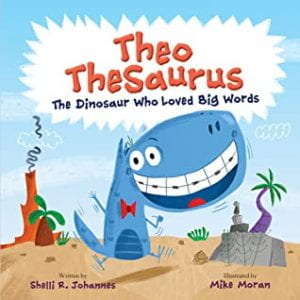 Theo and his parents are migrating, and his parents are excited, but Theo is worried about joining a new class where no one knows him. He and his parents are a special species of dinosaurs called Thesauruses–self-described ‘logo maniacs’ or word-lovers. Sure enough, Theo’s big words create a barrier between him and his new classmates. He tries to be friendly.  “Salutations!” he greets them; ‘Could you lead me to the athenaeum (library)?” in class; “Care for a crudite (raw snack)?” at lunch; “want to play conceal and search (hide and seek)?” at recess. Everything leads to misconceptions and confusion.  He keeps trying, even inviting them: “I request your attendance to celebrate the anniversary of my hatching.” When the birthday party arrives, but no friends do, Theo tries several words to describe his emotions but discovers he is speechless.  Then the doorbell rings and his classmates arrive, shouting, “Salutations!” Theo and his parents are equally excited to party with his new friends.

THOUGHTS: This is a cute concept, but the words used require explaining to K-2 readers for them to fully understand the humor. Also, Theo’s parents want to be helpful (but seem to miss the mark), while it is unclear what changes the minds of Theo’s classmates. A glossary of Theo’s “thesaurus” style words is included. Supplemental purchase. 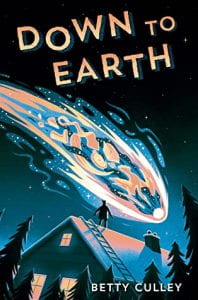 9-year-old Henry Bowers is worried about whether he will be a dowser. His family has worked the land, quarried for granite, and drilled for water in rural Maine for generations, and many of them have a unique talent for dowsing, or finding water through the use of a forked stick and instinct. While Henry worries about his upcoming 10th birthday, the birthday when dowsers find out if they have the knack for dowsing or not, he carries on with his quiet life, including taking care of his sister Birdie and recording his observations about rocks in his homeschooling journal. Then one night, Henry witnesses a very large meteorite fall into his backyard, and he feels an instant connection with the huge lump of space rock. The meteorite turns out to be both a problem and a blessing for Henry and his town, and ultimately, his connection to the meteorite helps him discover who he is and what he wants to do with his young life.

THOUGHTS: This is a heartwarming story about a thoughtful boy who finds himself and his unique gifts through acts of helping others. Henry and his family are loving people who endure hardships with grace, and the pace of the book matches the soothing pace with which they seem to live life. Vague allusions to the healing powers of water “called” by the meteorite are sprinkled throughout this book, but the emphasis on facts from encyclopedia and book entries, a visit from a scientist from the American Museum of Natural History, and Henry’s own journal of science questions keep the story believable and rooted in realism. 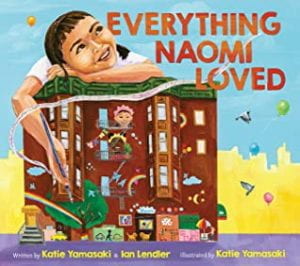 Naomi loves 11th Street, the place where she calls home. It has everything she and her family needs, including Mister Ray’s Automotive, pizza by the slice, a laundromat, her best friend (Ada), and more. One by one, however, 11th Street begins to change. They build a fancy building where her favorite tree once stood, and Ada moves away when they tear her family’s building down. Mister Ray explains to Naomi that things change, but they can keep the things they love with them by painting them into a mural. Mister Ray paints a beautiful tree, and he helps Naomi paint Ada underneath it. Eventually, Naomi’s family also moves out of their 11th Street home, but thanks to Mister Ray, she is able to take her memories with her. This is a beautifully written story about carrying memories we hold dear with us throughout the changing seasons of life.

THOUGHTS: This would be an excellent book to hand to a young reader whose family plans to move away in the near future. Perhaps readers, after finishing the story, could paint a portrait of all the things they hold dear, which they could take with them wherever they go. The book would pair well with other titles set in the city, such as Sydney Smith’s Small in the City (2019) or Marcie Colleen’s The Bear’s Garden (2020). Together, these titles would provide a comprehensive portrait of life in a constantly moving, ever changing city. Overall, this is a touching story with an important message about embracing positive memories when things change. 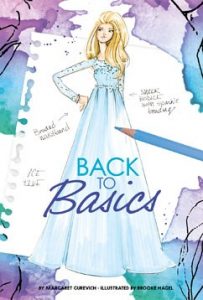 Margaret Gurevich expands her Chloe by Design series featuring aspiring teen designer Chloe Montgomery with these four volumes (vols. 9-12 in the series). Chloe has returned home to California following a successful summer internship with a New York designer. As she starts her senior year of high school, she finds it’s more stressful than she ever imagined. Her best friend gained a boyfriend and new friends while Chloe was away over the summer, and Chloe must find where she fits in within this new dynamic. In addition, college application season is quickly approaching and she must arrange visits and begin designing portfolios for the fashion schools on each coast where she plans to apply. Chloe also finds herself working with Nina, her former fashion design rival, designing dresses for their school’s upcoming Winter Formal. Will Chloe be able to successfully balance all these obligations and relationships? THOUGHTS: A perfect choice for middle school fashionistas, this series is an engaging, quick read. The plot not only features fashion-related storylines, but also storylines involving evolving friendships, as well as the complexities of applying to and choosing a college. The series is greatly enhanced by the presence of color illustrations throughout the text meant to depict Chloe’s sketches and designs. 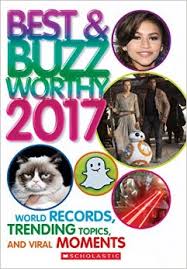 The Scholastic Book of World Records has been redesigned and rebranded as Best and Buzzworthy. However, the basic concept of the series remains the same: to share high-interest trivia tidbits and world records facts/lists with readers. With facts on topics such as music, technology, animals, sports, and other pop culture topics, this title is designed to appeal to a broad range of readers. The text is greatly enhanced by inclusion of photos, charts and diagrams on every page.  THOUGHTS: Trivia and world records books remain in constant circulation in most school libraries. The the wide-ranging trivia topics in this title are sure to capture the the interest of students. Recommended for purchase in elementary and middle school libraries (high schools with trivia fans may wish to pick up a copy as well). 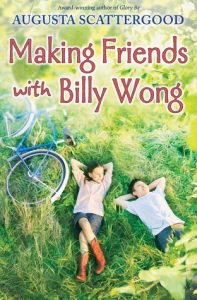 Azalea was looking forward to the summer of 1952. She was going to spend time with her best friend and her family was talking about taking a trip to the Grand Canyon. Her plans are upended, however, when Grandma Clark hurts her foot. Azalea now finds herself in rural Paris Junction, Arkansas, for the entire summer helping her grandmother out. Her bossy grandmother has Azalea working in the garden and running errands, one of which is to the Wong family grocery store. It is there that Azalea meets Billy Wong, a boy her age who is staying with relatives in order to attend a better school. At first, Azalea is wary of Billy; would she and a Chinese-American boy really have much in common? As the summer progresses, the two develop a friendship, and Azalea also interacts with others in town, including Willis, a bully who doesn’t like Billy. Azalea learns more about her family history and develops a closer relationship with her grandmother. As the novel closes, she is looking forward to visiting again the following summer. THOUGHTS: This novel is both sensitively told and historically illuminating. While most of the story is told from Azalea’s perspective, occasional chapters feature verse from Billy’s perspective, in which he shares his enthusiasm for education and also relates the prejudice and bullying he and his family sometimes face as Chinese-Americans in the segregated south. An Author’s Note at the end of the novel shares historical information about the history of Chinese-Americans in the southern United States.