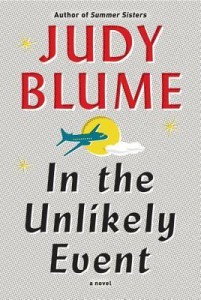 Although written for an adult audience, In the Unlikely Event is a historical fiction novel with appeal to high school readers.  Miri Ammerman, the 15-year old protagonist, leads the cast of characters in this character study as they maneuver life before, during, and after the winter of 1951 and 1952 when three plane crashed in the city of Elizabeth, NJ.  Through the changing character vignettes, and use of the Elizabeth Daily Post news reports, the town of Elizabeth comes to life beyond the tragedies.  Similar in style to J.K. Rowling’s The Casual Vacancy, the use of the third person limited narration rotating through the various citizens of Elizabeth enhances the reader’s understanding of how tragedy can bring about love, adventure, new life, and unforeseen loss.  THOUGHTS: Although lacking in plot (it is character driven), this is a great addition to high school historical fiction collections.

I listened to In the Unlikely Event.  Kathleen McInerny is a fabulous narrator.  She sucks you in first with her voice, and then the amazing story-telling of Judy Blume takes over, and you’re hooked.  I usually do not like character driven novels, but I really enjoyed this one.  I liked the short sections for each character within each chapter and the way the Elizabeth Daily Post articles are used to wrap up.  Although, I would have preferred less characters with separate sections since some only came in once or twice in their own section (even though they appear throughout the story in various situations and conversations about and with other characters).  Several sections and situations of the novel angered me.  I truly hate the principal at Hamilton Junior High and his attitude towards Miri and her writing (and family), and I found Natalie to be ridiculous and exhausting (although Steve’s actions and reactions were just as bizarre because of the timing).  Finally, I felt that the story itself was fine and did not need the “Las Vegas” section in the end or the end in general of the 35th commemoration.  I liked the “now” portions much better than the “after” sections.  Overall, this is a quality novel, and Judy Blume can still write some great scenes 🙂