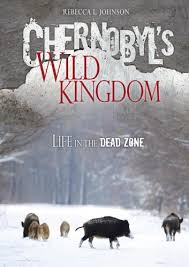 In April 1986, Reactor Number 4 at the Chernobyl Nuclear Power Plant in the Ukraine was scheduled to be tested.  The check was being held to see if the turbine blades of the reactor’s main generator would keep functioning if the reactor experienced a power loss. The turbine needed to work long enough to keep the cooling pumps running until back-up generators took over.  Everything that could possibly go wrong did. Reactor Number 4 exploded a short time after the power was cut, releasing more radioactivity than the first atomic bomb in Hiroshima.    The firefighters at Chernobyl and the citizens of the nearby town of Pripyat had no idea how serious these events were, until the nearby town of Pripyat was evacuated two days later.  Russian “liquidators” came to Chernobyl to put the reactor fire out and enclose its remains.  Soon, the Soviet military established a 30 km exclusion (“dead”) zone around the reactor, and it was abandoned.  Any wildlife that remained died, and most people assumed that the exclusion zone would become a lifeless territory.

It almost seems miraculous that life has returned to the dead zone.  Some species have been adversely affected by the radiation, but others show no obvious changes (other than the fact that they are highly radioactive).  Human beings have even begun to return to the outer perimeter of the exclusion zone, although those who were at Chernobyl during the explosion have experienced a high cancer rate.  Much of this book focuses on the scientists who are studying the wildlife and their methodologies for determining why some species aren’t affected.  Chernobyl’s Wild Kingdom also features an informative discussion of radioactive isotopes, their degradation, and the amount of radiation humans are exposed to during various nuclear “events” (like an x-ray).  The book ends with a thoughtful discussion of nuclear catastrophes, including the 2011 tsunami and explosion at the Fukushima Nuclear Power Plant in Japan.  The world’s dependence on nuclear power means that there is a strong chance that there will be similar incidents in the future.

This is a slim, beautifully photographed volume.  Students will find this story to be highly engaging, and it is attractive to even the most reluctant readers. When used in the classroom, Chernobyl’s Wild Kingdom can promote discussion of how plant and animal species respond to negative environmental effects.  It can also promote conversations on the costs and benefits of nuclear power, the role of governments in discussing disastrous events with citizens, and how scientists perform complex research while in the field.  All in all, this is a versatile and enjoyable book.