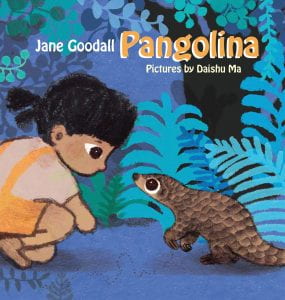 Pangolina grew up with a loving mother that took care of her everyday. As Pangolina grows older, her mother takes her out to explore the world, showing her all of the things she needs to know to eat and be safe. Pangolina is curious, learning about the different animals around her, even the humans that can sometimes be scary. As Pangolina grows even older, mother tells her it is time to leave so that she can find a mate and have her own baby. One night as Pangolina sleeps in her burrow, a scary man grabs her and puts her into a cloth bag. She is put into a cage where there are other scared and crying animals. Pangolina is about to be sold away, when a young child from the village saves her, as it is illegal to hunt and sell pangolins. Pangolina is sent to a sanctuary where she is safe, able to be with other pangolins, and be cared for.

THOUGHTS: A beautiful book about pangolins, an interesting animal, as it is the only mammal with scales. Pangolins are endangered and are a protected species. This book provides a heartwarming and suspenseful story about a pangolin, all the while providing information about this unique animal. The back of the book contains more information and resources to learn more about pangolins. 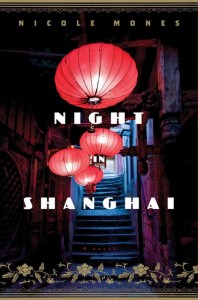 Night in Shanghai tells the story of expatriate Jazz musicians living in China prior to the start of World War II and life in Shanghai before and after the Japanese takeover of the city. The story begins with African American piano player Thomas Greene arriving in Shanghai after being recruited by Lin Ming to lead a Jazz orchestra that plays in a club owned by Lin’s father Du Yuesheng, a notorious crime boss in Shanghai. Soon, Thomas becomes enamored with the lovely and passionate Communist Song Yuhua, who was sold to Du to repay her father’s debts. As long as Song is still a possession of Du’s, however, Thomas cannot be seen with her. Surrounding their love story is the contentious atmosphere in China during the Japanese invasion and the beginning of Hitler’s conquests in Europe. Many musicians begin to flee as the Japanese take over, but they are replaced by Jews fleeing from Nazi controlled countries in Europe. This story of star-crossed lovers gives an interesting and sometimes little known (to American students) depiction of the turmoil in China during the 1930s and 1940s. The cosmopolitan and diverse city of Shanghai is highlighted throughout, and some of the most enjoyable scenes are in the Jazz nightclubs and hotels, where the music is given center stage. The novel also provides a non-Western view of the Holocaust, since the author includes real events and people in her novel, and describes in detail the actions of one Chinese diplomat who risked his life to save many Jews. Recommend this story to young musicians who enjoy historical novels, or those who want to know more about the influence of the Holocaust in non-European countries.

I picked up this book for two reasons: one, because it was a historical fiction and this genre is generally my go-to for summer reading; and two, because it incorporated an area of history that I am not that familiar with, that of the lives of Jazz musicians in China during the 1930s. I absolutely love getting lost in an historical fiction book during the summer, and flying away to different eras and times. While this title was not the best book I read this summer, it is definitely an interesting story that should appeal to a variety of students. It is not marketed as a YA book but has clear appeal to this population.

The story does start off a little slow, but once WWII begins and the main characters have more contact with each other and we learn more about each of them, about their hopes and dreams, and passions, the plot moves quickly. I have to note that my favorite parts of the book involved references and stories relating to the Holocaust. It was interesting to learn how the Jewish population was assisted by some Chinese diplomats and how many Jews were actually saved. The author includes an afterword detailing historical moments and characters, and the extensive research that she completed for the novel.

Our Honors English 10 students must all read one historical fiction novel as an independent reading selection, and I am excited to share this title with them. I often have musicians asking for interesting stories that incorporate music or depict the lives of famous musicians, or students interested in learning more about the Holocaust. And, this novel is not as lengthy as many historical fiction novels, so that is a big bonus with students as well! I look forward to reading other titles by this author. 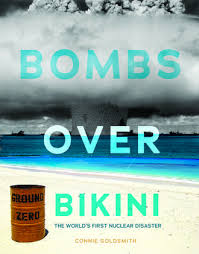 Post-World War II, in the wake of Hiroshima and Nagasaki, the race was on to increase scientific knowledge of nuclear bombs and radiation, and to outmaneuver enemies with the knowledge.  Plans were made, locations investigated, and the Marshall Islands were deemed the ideal locale for detonations.  “Would you be willing to sacrifice your island for the welfare of all men?”  So asked a Commodore of the U.S. Navy of the Bikini Islanders in 1946.  The answer was yes, and the people left with hopes of returning.  But it was not to be.  Author Connie Goldsmith investigates these events and details in-depth how three bombs in particular were detonated, how the islands and people were affected, and how the government either knew very little or kept it hidden or both.  She presents A-bombs Able and Baker, detonated in 1946, and H-bomb Bravo, detonated in 1954.  The immediate devastation was powerful, and the long-term hazards of radiation were staggering.  In the 1980s the Marshallese were promised compensation but have received very little.  This is a powerful look at a tumultuous time, and students can weigh the moral and military, ethical and scientific.  Well-written, with engaging sidebars and purposeful black-and-white photos and an intriguing title, this book will pull in readers.  Source notes, Glossary, Selected Bibliography, Further Information, Index. 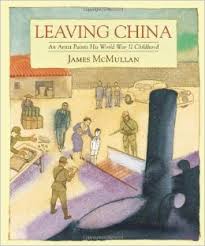 James McMullan today is a distinguished artist, designer and children’s book award winner (for I Stink! with wife Kate), but his early life was wonderfully complex.  Born in 1934, McMullan lived the early years of his life in Cheefoo, China, as a privileged, hesitant (much to his father’s distaste) boy.  The grandson of missionaries who built a successful orphanage and resultant fabric business, his parents continued the work—and lifestyle—as esteemed foreigners.  That is, until World War II, when the Japanese took control of China.  His parents hoped to stay in the life they knew, but with increasing loss of freedoms and increasing fear, his parents opted for a dangerous leave.  In order to freely go, they left the vast majority of their material wealth and, importantly for James and his mother, any sense of stability.  While James and his mother returned to her Canadian family, but eventually skip-hopped the globe (Shanghai, San Francisco, Darjeeling, and so on), his father devoted himself to soldiering with the Allied Forces and for three years did not see his wife or son.  James artfully recalls standout memories of his life from 1934-1946 on double-page presentations, an exquisite watercolor opposite the description of the event and emotions.  He shows many ups and downs, from stability with his aunt and uncle, to the humiliation of “failing” at being the strong, sturdy son his father clearly wished him to be.  The striking artwork conveys both the preciseness and ethereal quality of a life lived learning to enjoy space and place, when neither was guaranteed.  A treat for budding artists or anyone interested in the worldwide effects of World War II.