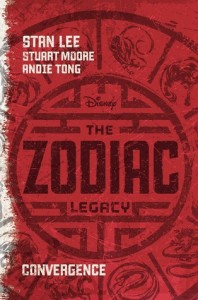 Steven Lee is a Chinese American teenager whose family has sent him on a tour of Hong Kong to learn about his cultural heritage.  One day, his group visits a museum and the tour leader disappears.  He follows her screams and ends up in a secret room underneath the museum.  He finds the woman, Jasmine, and a misguided war contractor named Maxwell.  Maxwell has released a mysterious power tied to the Chinese zodiac into the world.  This force finds hosts, each one born during a different year of the zodiac, and Steven is suddenly endowed with the powers of the tiger.  Both Jasmine and Maxwell are “dragons”, the leaders of the zodiac, and the dragon force is split uncomfortably between the two.  The bulk of the novel is about the battle between Jasmine and Maxwell to form teams out of the people who have been taken over by the zodiac force (and have the powers of the different animals in the Chinese zodiac).  Of course, Maxwell wants to use the force to increase his personal power and rule the world.

Many parts of the book are predictable, if not unrealistic.  Maxwell’s faction is well-funded and organized. Jasmine’s faction doesn’t have a lot of resources, and the new zodiac recruits are poorly trained.  Somehow, Jasmine’s group seems to prevail in every encounter with Maxwell’s Vanguard Force.  The end of the book involves an epic battle between the two forces that doesn’t end with a clear winner, setting the stage for a sequel.  This book is the first volume in a trilogy, and the second book will be published in late October 2015.

Convergence is notable for many reasons.  First of all, it is co-written by Stan Lee, the King of the comic book super hero.  The writing is fast-paced and exciting, even if it doesn’t get into a lot of character development.  Andie Tong’s classic comic-style illustrations lend excitement to the story line; fans of comic book art will love the action packed drawings.  Each member of the different factions has a unique personality and students will identify with many of them in a variety of ways.  Finally, this book may be an important bridge between graphica and traditional novels.  Fans of graphic novels may finally have a book they can get into!  This book will be very popular with reluctant teen readers.