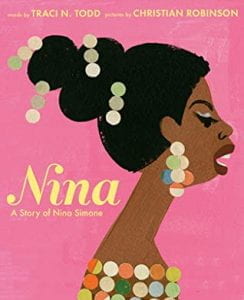 The world knew her as Nina Simone, but she was born Eunice Katherine Waymon. Born in North Carolina to a family that surrounded themselves with music, Eunice learned to play the piano very early. She was a musical child that would find rhythm in all aspects of her life, playing piano at the church where her Mama preached or playing Jazz music with her Papa at home. Author Traci N. Todd and illustrator Christian Robinson have created a gorgeous picture book biography about the life of Nina Simone. With a supportive family and community and an influential piano teacher, Nina started playing and singing in bars and concert halls. Audiences were enthralled with her sweet and soulful voice. But as the Civil Rights Movement gained momentum, Nina’s voice took on a powerful tone, almost booming, and her music became a powerful protest against racial inequities. She was known not only as a brilliant musician but an influential activist. Amplifying Nina’s humanity with direct and straightforward text and bold and brilliant artwork, Todd and Robinson created a compelling and masterful piece of art. The ending is powerful, perfect, and hopeful.

THOUGHTS: This picture book is so attractive, and it pulls the reader into each page with the story and the illustrations. Learning about Nina and her life from childhood to adulthood was a joy! From the dedication at the beginning of the book to the author’s note in the back of the book, there is much to absorb! I was sad to see it end! This book is recognized as a 2022 ALA Notable Children’s Book and has received several other accolades and praises. Nina should not be missed! 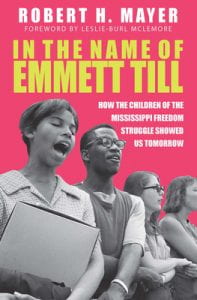 Robert H. Mayer opens this collective history of the “Children of the Mississippi Freedom Struggle” with the event that impacted their lives and motivated their activism: The brutal 1955 murder of Emmett Till. Many young people in Mississippi identified with Emmett. They also were Black, close to his age, and knew that a system that allowed such a terrible crime to go unpunished would likely also fail to protect them if they were ever assaulted or imprisoned (whether justly or unjustly). Spurred to action, they rejected the world of Jim Crow laws, organized youth chapters of the NAACP, planned sit-ins and vigils, and spearheaded marches. Profiled members of the “Emmett Till generation” include the Tougaloo Nine, the Freedom Riders, the North Jackson Youth Council, and many more. Brief chapters on the “Elders” of the Mississippi freedom struggle – Medgar Evers, Bob Moses, and Fannie Lou Hamer – appear at intervals, chronicling the contributions of the movement’s architects, especially their impact on younger people. The final chapter poses a question to readers: “Are you encouraged to examine your world and consider ways you and your peers might act to make the world better?” (177).

THOUGHTS: There’s always room on the shelf for well-written nonfiction with a different perspective on the Civil Rights era, and here Robert H. Mayer focuses on many spirited young activists and the events that shaped their commitment to the struggle. Readers without a strong interest in the topic may find In the Name of Emmett Till slow going, but excerpts would also work well for classroom discussion and research purposes. Note that in a prefatory comment, Mayer discusses his choice to include hateful racial slurs within quotes in order to illustrate “how often people used this word and how comfortable they were saying it” (xii). 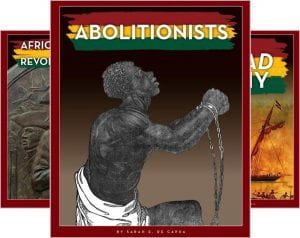 This reviewer read The Tuskegee Airmen from the The Black American Journey series. This series offers approachable information in a visually-appealing format relating to Black culture and the history of slavery, discrimination, and the Civil Rights Movement throughout American history. Each book in the series includes clearly-labeled sections, attractive sidebars and captions, bolded vocabulary words that are also found in the included glossary, and a variety of interesting historical photographs to accompany the text. “Think about it” questions, a timeline, and an index round out the back matter for each book.

THOUGHTS: These titles would make great additions to collections where students will benefit from engaging text introductions to the topics in this series. Fans of military history would also enjoy this quick read about a fascinating chapter in the evolution of fighter pilot training, racial integration, and the Air Force. (Title Reviewed: The Tuskegee Airmen.) 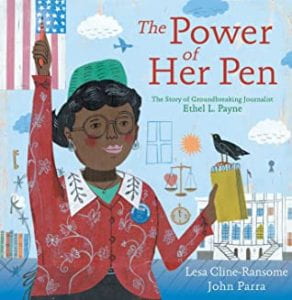 The life of Ethel L. Payne, the “First Lady of the Black Press”, is depicted in this picture biography. Born in Chicago in 1911, Ethel loved listening to her grandparents’ stories of the cotton fields in Kentucky and her parents’ own sharecropping tales. Ethel developed a love of writing and after high school fought against racism in her community. After World War II, she left for Japan and collected stories from black American soldiers on the base, noting the unfair treatment they received from the Army. Soon Ethel’s stories from Japan were sent to American newspapers. On her return, Payne took a job as a features editor with the Chicago Defender, an African American newspaper.  Her stories progressed from local events to covering the Democratic National Convention. Eventually, Ethel moved to Washington DC and became one of three African American reporters with a White House pass. For the rest of her life, she wrote stories that focused on civil rights and the issues facing African Americans.  There is an author’s note that gives more details on Ethel L. Payne’s life. John Parra has used acrylic paint to create illustrations that feature other well-known African Americans. Readers will enjoy poring over the drawings to search for the small objects found throughout the text, including the clocks that move forward in time by the end of the story.

THOUGHTS: This text is a worthwhile addition to elementary collections. Readers will learn about the life of this famous African American woman and her important contribution to the civil rights movement. 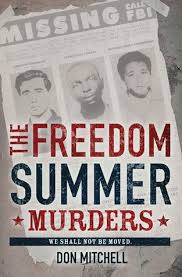 The Freedom Summer Murders was published to commemorate the 50th anniversary of the murder of three civil rights activists by local politicians and the KKK in Mississippi.  In June 1964, Mickey Schwerner, Andrew Goodman, and James Chaney traveled to Neshoba County, Mississippi, to facilitate black voter registration.  What happened to them was unthinkable.  The story opens with a discussion of the State’s entrenched racism and a recounting of the events that led to the murders of the three men.  Each man’s life is described in a separate chapter; something that helps the reader appreciate how devoted each was to racial equality. The book then describes the investigation of the murders and the long road to achieving justice for the three civil rights workers (Edgar Ray Killen, who came up with the plot, wasn’t convicted until 2005).

Clearly, many activists were killed during the Civil Rights movement.  Mitchell argues that the murders of Schwerner, Goodman, and Chaney captured the Country’s attention because Schwerner and Goodman were white.  Most Americans at the time didn’t pay close attention to the deaths of black activists.  One of the reasons this book is significant is that Mitchell implies that we still don’t place as much value on a black life as a white life.  The question of whether or not racism is still as institutionalized today as it was in the 1960’s is a relevant one.

The amount of research that went into this book is impressive.  Mitchell interviewed most of the living witnesses to the events in Neshoba County.  He also utilized a number of primary sources of information and obtained relevant photographs.  One especially disturbing photograph shows the bodies of Shwerner, Goodman, and Chaney after their shallow grave was unearthed.  The book contains an “Author’s Note on Sources”, which provides web addresses for a number of very interesting sites including the Andrew Goodman and James Earl Chaney Foundations, telephone recordings of President Lyndon B. Johnson’s conversations regarding the murders, and televised coverage of Edgar Ray Killen’s 2005 trial on C-SPAN.  These resources, and others mentioned in the author’s note, will appeal to today’s technology savvy student.

This book is a necessary inclusion in any secondary school library.  It compels students to consider race relations in the United States and it also encourages them to contemplate their role in promoting a better society for all.