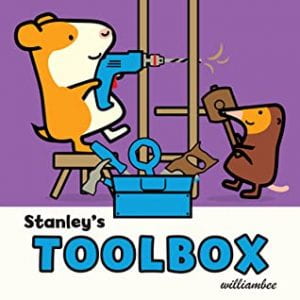 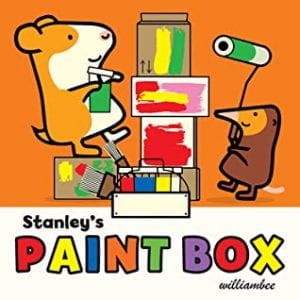 Stanley is back in two new board books for children birth-PreK. In Stanley’s Paint Box, Stanley helps Sophie, Benjamin, and Little Woo paint a castle.  Beginning with red, yellow, blue, and white paint, Stanley helps his friends use various items for painting: rollers, sponges, and brushes, while also teaching them how to create different colors from the original four colors. As Stanley mixes colors to create orange, green, purple, and pink, readers are introduced to the combination of primary colors to create secondary colors. Color words, along with the items used for painting, are highlighted throughout the book to help children learn their colors and painting terms.

In Stanley’s Toolbox, Little Woo’s tree house is in need of repair, and Stanley is here to help. Using various tools, Stanley helps Little Woo fix the ladder, roof, and floor of his tree house, and then helps Little Woo decorate it. As with previous Stanley titles, words for specific tools used by Stanley and Little Woo are highlighted to help young children learn terms associated with tools.

THOUGHTS: In addition to teaching young children about painting and building, both titles help young children learn kindness and how to lend a helping hand. As with the previous Stanley titles, these board books include bright, colorful illustrations with plenty of white space to focus young children on the connection between illustrations and words, while also learning about colors and tools. 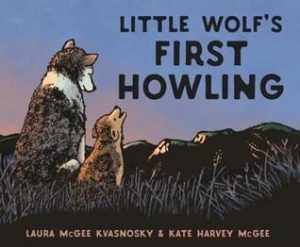 This is a delightful tale of a young wolf who sets out with his father to make his first howling at the top of the hill.  His father shows him the proper technique, but Little Wolf cannot help adding his own unique touch at the end. First he howls, “I’m hooooowling,” but then gets more creative with the addition of “dibbity dobbity skibbity skobbity skooo-wooooo…”.  Despite his father’s admonishment to use the correct form, Little Wolf includes even more interesting phrasing.  Big Wolf then realizes that he likes his son’s originality and father and son howl in unison in an unwolflike style.  McGee’s full bleed illustrations are done in gouache resist and then colored with Photoshop.  The illustrator has created a mountainous landscape set from dusk to evening with its full moon and starry sky. Kvasnosky’s simple message is that we need to be true to ourselves.  THOUGHTS: Children will enjoy this tale of the two wolves, who are very appealing and almost cuddly.  This book makes for a great read aloud and will work in character units. A worthy addition to elementary collections. 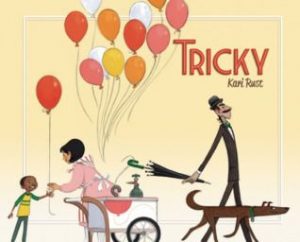 Tricky is a dog that is often up to no good, mostly because of his dubious owner named The Duke. Whether tripping or tricking or stealing or just causing mischief, The Duke and Tricky are a team that has few scruples and revels in their misdeeds. All that begins to turn when Tricky meets a new baker in town who offers him some kindness and a treat. Filled with warmth and a growing conscience, “Tricky realized that what they were doing was WRONG.” But, is it too late for this old dog to learn a new trick? And, how will he get The Duke to see the error of their ways? Kari Rust’s debut picture book is full of engaging, humorous characters and well designed drawings that allow the reader to empathize and emote as the story unfolds. The text, and the moral lesson, are simple yet effective, and hopefully Tricky and The Duke will both mend their ways. THOUGHTS: The hand drawn, computer colored illustrations would pair well with The Adventures of Beekle by Dan Santat. Plus, the details in the pictures jump out more and more with repeated viewing. This short text would also be great for a lesson on point of view or caricature or inferencing. 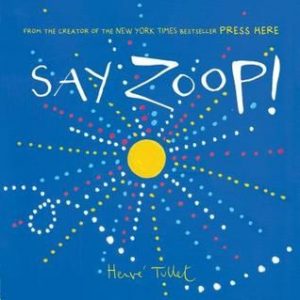 Following the fun success of interactive books such as Press Here and Mix It Up! comes the newest picture book by Herve Tullet. This time we follow simple blue and red dots and build some ‘Oh’ and ‘Ah’ sounds to match them. The patterns and sequences on each page are nicely mixed with imagination and variety to keep the reader guessing and practicing. When the yellow ‘Waahoo!’ joins the mix, we are all in for the creative musical mess that follows! As the book ends, “Doesn’t that make you want to try mixing it up into some completely new sounds?” Tullet has another hit on his hands, and young readers have another vocal colorful adventure to explore!  THOUGHTS: This series has also worked well for me with some autistic readers who crave tactile stories, especially with built-in sound effects! A music teacher could also easily incorporate this book into a lesson about volume, pitch, patterns, or more. 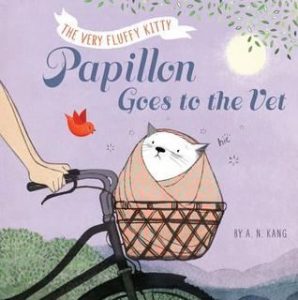 Kang, A.N. Papillon Goes to the Vet. Hyperion, 2017. 978-148472881-9. $16.99. Unpaged. Gr. K-2.
Papillon is back! Previously seen in A.N. Kang’s debut, Papillon, The Very Fluffy Kitty, Papillon is a cat so fluffy that he can fly. As the second book opens, Papillon is enjoying life and playing catch with his bird friend. As they are playing with a small stuffed mouse, Papillon accidentally swallows the stuffed toy. This causes Papillon to feel sick and to develop constant hiccups. Worst of all, he is no longer able to float in the air! Miss Tilly, his owner takes him to see the vet. Admitted to the vet clinic for an overnight stay, Papillion is feeling sick, lonely and scared, when his hiccups cause him to burp up the swallowed toy. Able to float once more, Papillon takes to the air to show off his dancing and singing ability, which wows the fellow cats at the vet clinic. The next day, he returns home, looking forward to playing once more (but this time, with his mouth closed). THOUGHTS: This engaging book would be a good choice for a read-aloud story. Readers will be able to relate to Papillon’s stress and uncertainty when he is sick. Kang’s watercolor, color pencil, ink and Photoshop illustrations bring Papillon’s exuberance and joyful spirit to life. Not just for cat lovers, Papillon Goes to the Vet is a story that all readers can enjoy.
Picture Book      Elizabeth Henry, Lampeter-Strasburg School District 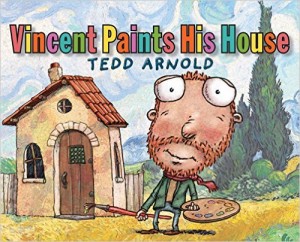 Fly Guy author Tedd Arnold departs from his usual silliness with this nod to the painter Vincent Van Gogh. While the artist is never actually mentioned in the book, the main character Vincent, complete with reddish hair and beard like his namesake, sets out to paint his house. He struggles with what color to paint, as each page introduces another critter who voices its opinion. Through repetitive text, the story can be a simple introduction to colors or a more complex look (each page has a set of paint tubes with varying shades of the color, such as Cyan, Royal and Cerulean). As he gets increasingly covered in paint, the story builds to the final page which is a colorful house set in a “starry night” background.  Thoughts: This is book will be a hit on so many levels! Fly Guy fans will love the similar pictures, the bugs, and humor. Art teachers can use it to teach colors, basic or detailed, or to introduce Van Gogh. Definitely properly shelved as “E ARN”, it can be paired nicely with many primary art books for library or art class lessons.