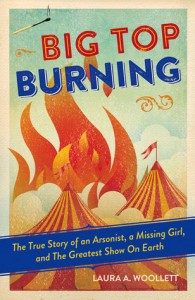 “Some say they saw the flickering of a small flame on the side wall of the tent just above the men’s bathroom. At first no one moved; surely the circus staff had it under control. But by the time circus workers reached the fire, their meager buckets of water had little effect. As the crowd watched, the flame grew, spidering up the tent wall. Then someone yelled, “Fire!” and the panic began….” (1)

So begins Woolett’s riveting tale of the July 1944 fire in Hartford, Connecticut, that claimed 167 lives under the Ringling Brothers and Barnum and Bailey circus tent. The circus was a big event, widely anticipated and widely attended by adults and children. The huge tent was “450 feet long and 200 feet wide—one-third longer than an entire football field.” The included black and white photographs help to show the enormity of the tent and the devastation left by the fire. In fact, over 6,000 people attended the circus that hot afternoon. Woolett focuses her early story on the fire itself and memories of survivors. She then turns to medical efforts and family identification, turning to the disappearance of young Eleanor Cook, then 8 years old, attending with her mother and two brothers. Though her older brother jumped from the bleachers to safety, her mother was badly injured, and her younger brother died the next day from his injuries. In the panic under the tent, Eleanor’s hand slipped from her mother’s. Identifying Eleanor’s body proved to be a quest of many years’ work—and it is still unknown if “Little Miss 1565” was Eleanor, or if her body was hastily mistaken by grieving relatives of another girl. And what of the cause of the fire? Officials labeled it accidental until six years later when young circus worker Robert Segee claimed to have set it, only to recant his claim months later. The fire’s cause, too, remains unknown, though the “accidental” label was officially changed to “undetermined.” Woolett does an exceptional job of bringing the fire and the time period to life, showing the care given to victims and families by the people of Hartford. She does not delve into the grief undoubtedly felt by the families of so many victims—but neither does she exploit them here. This is a high-interest and non-gory read that will pull in reluctant readers, for the story of the fire and the forensic science attempts to solve it. At 131 pages of story, it is easy to recommend to upper elementary and middle school readers.
Author’s Note, Acknowledgements, Notes, Bibliography, Image Notes, and Index comprise pages 133-167.

This book, with its eye-catching cover and small size, could well prove a first pick for booktalks and readers of nonfiction. It could be used as an example of literary nonfiction, and Woolett helps by briefly describing her research process, with full documentation. I found this easy to read and hard to put down. Many will be surprised if not dissatisfied to know that the two major questions—involving the cause of the fire and the identity of Eleanor Cook—still remain unanswered.

It is hard to imagine America’s home front during World War II.  With very little money and ways to socialize, Americans looked forward to events such as the Ringling Brothers Circus coming to town. Clearly present day circuses are far different than those of the 1940s.  Hiring of locals to be present under the seats of the patrons was a necessity.  Smoking was not banned inside the tents, and if a cigarette butt was dropped or discarded under the seats, it may ignite the hay.  These boys were hired to extinguish the fires before they became overwhelming.  Even more, local government agencies were asked to come out and make sure the circus was up to code.  In the instance of the famous Hartford, Connecticut fire, there was a delay in getting to the venue. Therefore, the inspector was unable to inspect everything, signing off only after being promised 50 tickets to the show. Coupled with the inadequate inspection, the circus was still using tents that were treated with gasoline and turpentine, a highly flammable combination.  The story wraps all these factors together with a story of a little girl who is going to the circus with her mother and ends up burned to death. A CSI-type mystery, the story is engrossing and often unbelievable, knowing what we do now about science.