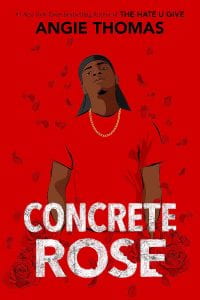 Real men take care of their family and even though he’s 17 years old, that’s what Maverick plans on doing when he finds out he’s a father. The way Maverick helps his family at the beginning of the novel is by dealing with the King Lords. That career choice doesn’t bother Maverick too much until he becomes a father to a baby boy he names Seven, then Maverick decides it’s time to straighten up. However, walking away from the King Lords is easier said than done, and it will take everything in him to do so.

THOUGHTS: If you read and loved The Hate U Give, this is a must read, and I feel you can read them in any order. It definitely gives the reader a better understanding of Starr’s father, and you empathize with him throughout the novel. Highly recommended for any high school collection!