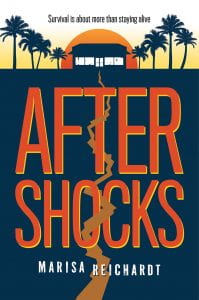 Ruby thought her world ended when her mom informed her she was dating Ruby’s high school water polo coach. But she soon finds out what the end of the world, or her world, really looks like. Skipping practice because she’s too embarrassed to face her coach, Ruby is hanging out at a laundromat, looking for someone to buy beer for her, when an earthquake hits. As a native Californian, Ruby is used to earthquakes, but it quickly becomes apparent that this is no minor tremor. “The ground shakes, the walls fall”, and Ruby is trapped under the rubble of the laundromat, with a young man named Charlie, with whom she had just started talking. The ‘Big One’ has hit. A 7.8 magnitude. She and Charlie can’t see each other, but they work desperately to bolster each other’s spirits. Minutes turn to hours as the pair assess their physical condition and tell each other stories and bits of their lives. Hours roll over into another day, and another, and Ruby and Charlie face the very real possibility of not being rescued in time, before their injuries overwhelm them. Unusually, the eventual rescue occurs halfway through the book and, true to the title, the second half deals with the aftershocks of the rescue and the earthquake. The pain and trauma. Ruby desperately needing her mother, but having no way to locate her in a world twisted and ravaged by the quake, bereft of cell service and internet. Ruby needing to make amends to the people she loves. The book is both edge-of-your-seat compelling and lyrically thoughtful. Reichardt’s writing deftly changes from gripping, gruesome descriptions of the immediate aftermath of the earthquake, to heartbreaking, poetic passages as Ruby drifts in and out of consciousness, ready to embrace death. While character descriptions throughout the book are minimal, context clues imply that Ruby and Charlie are white.

THOUGHTS: This can’t-put-down book delivers it all: a compelling disaster story, with a satisfying ‘after’ that most books neglect. It was lovely to close the book knowing “the rest of the story.”