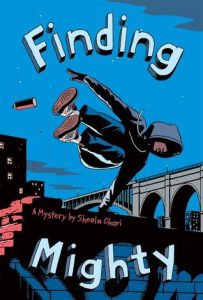 Secrets and lies. Friends and enemies. Losing and finding. Finding and keeping. Peter, his brother Randall, and Myla are all looking for something. Peter is looking for his older brother, Randall, who left home one night, leaving a note that reads “Don’t find me.” Randall is a graffiti artist who sets off a chain of unanticipated events the night he tags OM on a train station wall. Randall found the tag in a journal belonging to his father after his father died in a fall at a construction site. Myla, trying to find an identity for herself as she enters middle school, purchases a necklace with the OM symbol on it, a necklace someone very much wants back. Coincidentally, or maybe not, Peter and his mother move into the house next door to Myla, and the two join forces to solve an old mystery, one that is becoming dangerous for all involved. THOUGHTS: This well-crafted mystery is a can’t-put-down book. The story is told alternately by Myla and Peter, and Randall as well later in the story. The clues are all there if you are sharp enough to catch them. All the characters are well developed. Myla and her family are Indian, and Peter and Randall are mixed-race. 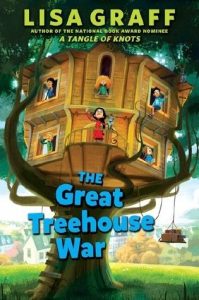 Winnie’s life changes drastically with her parents divorce. Supremely competitive, her parents work out a custody arrangement where Winnie alternates days with her parents, spending Wednesdays living in a fabulous treehouse erected between the two properties.  However, her parents continue to try to outdo each other, planning increasingly more elaborate activities for Winnie, until she is exhausted and failing fifth grade, having no time to do homework. When she is unable to get either parent to listen to her, she takes drastic measures; she retires to her treehouse (which, it turns out, is not part of the United States. Maybe.) and refuses to come down until her parents are willing to talk to her together. However, she is not alone for long. Soon, her friends begin to show up with sleeping bags and snacks, defecting to her treehouse nation with their own demands. The Treehouse Ten soon capture national attention. But, will the stress of their holdout be the end of their friendship? THOUGHTS:  A delightful romp that all students will enjoy. Each of the characters is well defined, and their demands are thoughtfully crafted. While they initially seem shallow, Winnie realizes each friend has a deeper need that led him or her to the treehouse. The book design is also lovely, with lots of drawings and attached notes from the various friends.

Winnie’s parents are getting divorced, so Winnie splits her time between her mom and dad, and they insist that the time be equal. The solution? Three days a week with each parent…and on Wednesdays, Winnie spends her evenings in her custom-built treehouse that splits her parents’ neighboring properties. Winnie loves her solitary Wednesdays (spent with her beloved cat) because they are free of her parents’ over-the-top competition. In a bizarre tradition that got very out of hand, each parent now finds daily “holidays” to celebrate in huge fashion. National UFO Day, anyone? These celebrations leave Winnie exhausted, frustrated, and without any time to spend with her friends or even do her homework! Winnie reaches her breaking point when her fifth grade teacher tells her that she’s in danger of failing fifth grade and her parents are more interested in one-upping each other than supporting her academics…so Winnie does something extreme. She takes her cat, her homework, and a few necessities, and heads to her treehouse, which she refuses to leave. Within a short time, nine of her friends join her, and the Tulip Street Ten become famous.  Winnie writes about her experiences in her final fifth grade project, completed in the treehouse to ensure that she passes fifth grade. Her friends add notes throughout the story, helping readers get to know all the kids a little bit better. The storyline is certainly full of comedic exaggerations and zany characters, but Winnie’s frustration over the divorce is real and Graff does a great job of showcasing it. THOUGHTS: A really enjoyable story for kids who can handle a dose of comedic exaggeration with their realistic fiction. 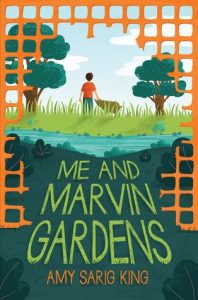 Obe’s world is being reduced one house at a time. His family’s land is being sold off and turned into a housing development. His best friend, Tommy, has defected to hanging out with the new, wealthier kids moving into the development. A nervous boy, either ignored or derided by his parents, and prone to nosebleeds, Obe haunts the banks of the creek behind his house and the nearby Schuylkill River picking up trash the construction workers leave behind. That’s where he comes across the pig-like, slime-covered creature he names Marvin Gardens. Marvin, Obe discovers, loves to eat plastic. He attempts to keep Marvin a secret from family, friends and construction workers, and feed his continuous appetite. But the upside of Marvin has a disastrous downside; he defecates toxic, fluorescent poop that causes damage at the construction site. The race is on to save Marvin before the adults find and destroy him.  THOUGHTS: A wonderful story dealing with environmental issues, friendship, trust, and interspersed with historical vignettes, connecting Obe’s story to family history 100 years ago.  Obe’s awful parents are offset by Ms. G., his adored teacher who instills his love of science and environmental concern, and who aides Obe with Marvin. Highly recommended.

This book is award-winning YA novelist A.S. King’s first novel for middle-grades. Obe Devlin is a budding environmentalist living on the outskirts of land that used to belong to his ancestors but is now being taken over by developers. A loner whose one-time friend has deserted him for the in-crowd, Obe finds a strange but loveable creature in the woods near the builders. It’s something like a pig, and something like a dog, and smells terrible. It’s most distinguishing feature, however, is that it feeds only on plastic. Obe names the creature Marvin Gardens, after the Monopoly property, and at first keeps his amazing discovery to himself.  He doesn’t want Marvin exploited, or, worse, destroyed. But he knows he can’t keep the secret forever, and also wonders if Marvin might be a partial solution to the world’s environmental woes.  At the same time, Obe must contend with turf wars, bullying, and a budding new friendship with a girl whose parents who are afraid to let her out of her own backyard. THOUGHTS:  Obe is as fascinating and unique as Marvin Gardens himself. Additionally, unlike many young protagonists, he has the self-confidence and insight to deal with challenges without allowing them to diminish his sense of self.  An appealing and satisfying read.