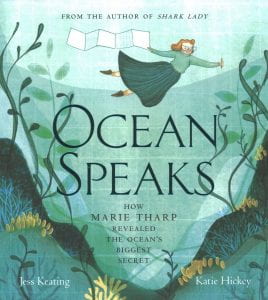 From the time she was a young girl, Marie loved being outdoors. From feeling waves splash on her toes to discovering boulders, trees, and bird calls, she was fascinated by the world around her. But, girls were not supposed to have outdoor jobs involving rocks, mountains, and sunshine, and they weren’t supposed to dream of becoming explorers or scientists. When men enlisted during World War I, women like Marie had their chance to study science. Marie learned as much as she could about earth science and geology, and she secured a job in a New York laboratory. When men returned from War, they were sent on ocean research trips, but Marie had to stay behind. As her male colleagues sent back box after box of measurements, Marie used the data to create a map of the ocean floor. She’d found a way to be an explorer, even if she had to stay in her small office. After weeks of plotting data, Marie discovered a giant rift valley on the bottom of the ocean floor: a long crack with mountains on both sides. Her colleagues made her redo the map, and even then, no one believed her work was accurate. Jacques Cousteau sent cameras to the bottom of the ocean to prove her wrong, but instead, the cameras captured the evidence revealing Marie was actually correct. Today, she’s credited with mapping the mid-Atlantic ocean ridge, and her maps have been displayed at the Library of Congress. Katie Hickey’s watercolor and pencil illustrations, featuring a palette of primarily blues, yellows, and greens, gorgeously capture the spirit and perseverance of this unsung scientist. Two pages of Author’s Notes and Questions and Answers provide further insights about Marie Tharp and her legacy.

THOUGHTS: Share this story of female resilience and determination as part of STEM units or during elementary morning meetings. Also a great choice to recommend to girls who are interested in outdoor pursuits such as rock collecting, bird watching, and exploring. 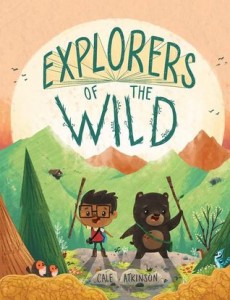 A bespeckled brown boy and a cuddly-looking brown bear have a favorite activity in common: Exploring! Their stories parallel, each individually discovering the same love of nature. When they encounter something unexpected (each other) they become nervous for the first time. But differences lead to similarities, and both the boy and the bear find they have the same passion. They adventure together and find that a shared experience is a deeper one. When it is time to go home, they are fast friends.  THOUGHTS: A great book for the nature lover about being the same and different all at once. It’s fun for children to pick out the tools the boy has (snacks, flashlight) and how the bear has comparable ones (berries and nuts, fireflies).