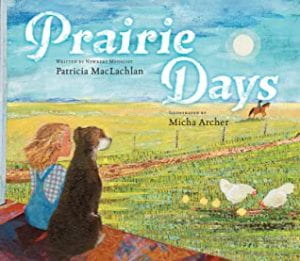 This beautifully illustrated picture book is an ode to carefree summer days on the prairie. Told in the voice of a young girl, this semi-autobiographical work is set in a farming community around the late 1940s. The author’s lyrical text describes how the girl and her friends spend their days playing kick the can, swimming in the farm pond, riding horses, and buying candy at the general store. MacLachlan’s verse is a delight for the senses, as she writes about the smell of “the cattle and bluegrass and hyssop,” the taste of cold drinks, the sight of prairie dogs, the feel of grain that “sneaked into our pockets,” and the sound of dogs barking as they herd sheep. The illustrations are colorful collages reminiscent of the work of Ezra Jack Keats. To make this artwork, Archer uses acrylics, ink, textured and homemade paper, stamps, origami and newsprint and even includes what appears to be real lace for  the curtains.  Children will enjoy poring over these imaginative drawings. The text and images work together to take the reader back to a happy-go-lucky time, when children played outside all day until their parents called them home at night.

THOUGHTS: This engaging book should be a contender for the Caldecott Award. The story will leave young listeners yearning for summer vacation and mature readers nostalgic for the summers of their childhood. 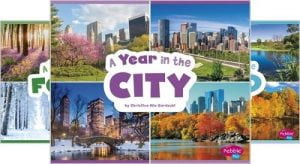 Readers can explore the four seasons as seen on a farm or in a city, forest, or pond. Large color photographs compliment simple, factual text that covers the basics of changing seasons in each setting. Spring on the farm finds farmers plowing, planting, and welcoming newborn animals; in summer, “Crops grow in the warm sun. Tomatoes ripen. Cornstalks stretch from the earth.” Pebble Plus continues to produce high quality, high interest nonfiction for early readers. Each book includes a table of contents, glossary, index, and resources for students interested in learning more about the topic.

THOUGHTS: An attractive addition for collections looking to update their offerings on the four seasons or any reader who enjoys learning something new. 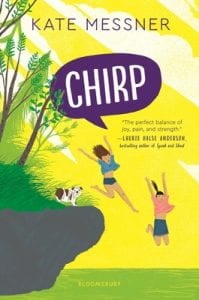