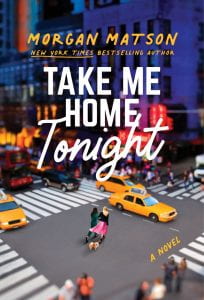 Dubbed Ferris Bueller’s Day Off meets The Babysitter’s Club by the author herself, Take Me Home Tonight is a 12-hour romp through New York City filled with mishaps around every corner. Best friends and theater kids Kat and Stevie just want theater director Mr. Campbell to post the cast list for the first production of their senior year when he unexpectedly decides he needs another weekend to finalize the cast. Then, Stevie’s dad predictably backs out of her birthday dinner plans. Kat tries to cheer up her disappointed best friend and fix this frustrating Friday (in more ways than one, unbeknownst to Stevie) by deciding that she and Stevie sneak into New York City and take the dinner reservation instead of Stevie taking her mom like her dad suggested. (They’ll also go see Mr. Campbell’s play while they’re there, though Kat doesn’t tell Stevie about that part at first). The girls devise an elaborate plan, using their friend Teri as a cover, and leave their suburban Connecticut town for an adventure in the Big Apple. Secrets, step siblings, a destroyed cell phone, and a really charismatic dog get in the way though. Will their friendship survive the night?

THOUGHTS: There is something – which I can’t put into words –  about a Morgan Matson book that just feels a notch above the rest. Readers can always count on certain elements in her books, and this one is no different – there is a trip, a dog, some romance, and of course, the “Easter Egg” characters that pop in from her previous books (mini-spoiler alert: there are SEVERAL previous characters in this one, and they play slightly bigger roles than usual!). And there’s some surprisingly fun action in this one, too, a bit of a departure from the author’s norm. This comedy of errors is a must-have for your YA contemporary collection, especially if you have any other Matson books. 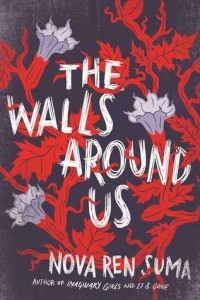 The “Bloody Ballerina” Orianna Speerling is fifteen when she is convicted of murdering two rival dancers. A month after her sentence begins, all forty-two girls interned at the Aurora Hills Secure Juvenile Detention Center are dead as a result of an unexplainable mass killing. Ori’s story is gradually revealed through the eyes of Violet, Ori’s best friend, a fellow dancer who knows more about Ori’s crime than she is willing to admit since she does not want to risk her future career as a professional dancer. The second narrator is Amber, an inmate at Aurora Hills, who is serving a long sentence all while keeping secret the fact that she has visions of girls she’s never met. Suma interlaces the three narratives brilliantly.  THOUGHTS: The Walls Around Us is well-written, and Suma expertly tells the story of Ori through the eyes of Amber and Violet. Creepy, ghostly, and macabre with a twist ending, The Walls Around Us will stay with readers after they have finished. 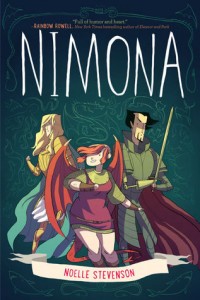 Ballister Blackheart (a former ex-knight and current supervillain) is focused on the destruction of the Institute of Law Enforcement and Heroics, but he also has a score to settle with former acquaintance, Sir Ambrosius Goldenloin. Blackheart is putting his plans in motion when in steps Nimona (a shapeshifter) who claims to be his new sidekick. Nimona has little concern for human life and following the rules of villainy leaves Blackheart with the task of keeping her under control. The two soon discover that good and evil are not as separate as they thought. Stevenson creates a tremendous world blending medieval times with modern times and science fiction. Nimona is a flawed and interesting protagonist, and the interactions between the characters are interesting. THOUGHTS: Nimona is an excellent example of a graphic novel getting things right. There is fantastic world building along with dynamic characters. Sometimes bad is good and good is bad in Nimona, which adds to its appeal.