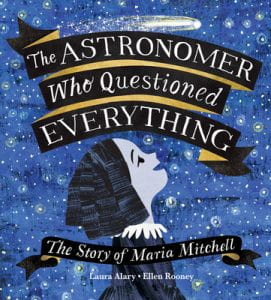 This picture book biography is the story of a female pioneer in the fields of both astronomy and education. Maria Mitchell was born on Nantucket Island in 1818. Her father was an astronomer/mathematician and her mother a librarian. As Quakers, they believed in the equality of all people and so they encouraged their daughter’s quest for knowledge.  Maria’s father taught the young girl how to use and repair a telescope and nautical instruments. She recorded all her observations in a notebook. As a young woman, she opened a school for the island children and then became a librarian. One day Maria learned that the King of Denmark was offering a prize for the first person to find a new comet. The young astronomer spent hours on the roof searching the skies with her telescope and her perseverance paid off when she sighted one. Maria left for Europe, where she received many accolades and gave lectures to scientific societies. Vassar, a new women’s college, offered her the position of Professor of Astronomy and she accepted. At that time, some opposed college education for women, but Maria was not deterred. She took her students outside to observe the stars and encouraged them to question everything. In the author’s note, Alary provides more details about Mitchell’s life and points out that she was a “woman of firsts”- first female astronomer, scientific consultant hired by the US government, and among the first college professors. Rooney’s artwork is done in collage and has amazing detail.

THOUGHTS: Young inquiring minds will enjoy reading about this scientist who faced challenges and never stopped asking questions. Perfect as a read aloud and for STEM units. This is a must-have for elementary collections. 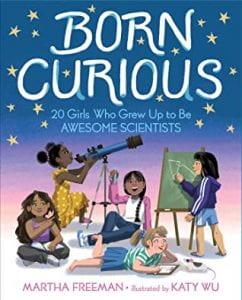 Born Curious is a biography of 20 female scientists in one kid-friendly collection. A diverse collection of disciplines and scientists are covered. Each biography starts with childhood influences and follows the scientist throughout her career. A colorful, full page portrait is included for each scientist as well as a “round up” box at the end of each bio that includes her greatest achievement, a quote, and a fascinating fact. Includes an Afterword that sums up 13 traits of the scientists featured, a glossary, an index, and a thorough source list for each scientist.

THOUGHTS: This collection features scientists that are not household names presented in a friendly and accessible format. Could be read for those interested in science as a non-fiction read and can also be used for research. 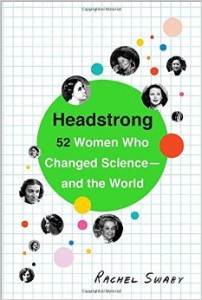 Swaby, Rachel. Headstrong: 52 Women Who Changed Science – and the World. New York: Broadway Books, 2015. 978-0-06-222410-1. 273 p. $16.00. Gr. 9 and up.
The story behind Headstrong: 52 Women Who Changed Science — And the World by Rachel Swaby almost sounds like fiction. In 2013, an obituary for award-winning rocket scientist Yvonne Brill opened with this now-infamous line: “She made a mean beef stroganoff.” While that may be true, is it really the most fitting way to memorialize a woman who was honored with the 2011 National Medal of Technology and Innovation? Now, thanks to Swaby’s wonderful new book, we will all know a little more about the many women (52, to be exact) who have impacted the fields of science, technology, engineering, and math. Swaby has included women whose stories combine the “twin pillars” of achievement and narrative – there’s a great story embedded within each profile. She also opted to cover only scientists whose life’s work has been completed (in other words, these women are no longer with us). There’s a 3-5 page profile of each woman, contextualizing her work in her field with world events of the time; for example, many Jewish scientists fled Germany during the 1930s to pursue research positions elsewhere. Some of the names are familiar, such as Rachel Carson, Sally Ride, Florence Nightingale, and Hedy Lamarr. Though the names of others may be lesser known, the scientific ripples of their discoveries are fascinating to read about.
509.2; Science, Biography    Amy V. Pickett, Ridley High School
I immediately had Headstrong pegged as a worthwhile read, but Swaby’s spirited writing style was a pleasant surprise. I found myself reaching for this book again and again instead of picking up one of the many novels on my to-be-read list!