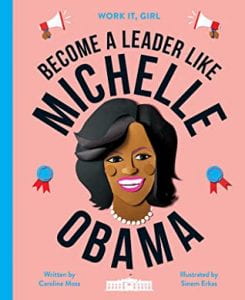 A beautiful, appealing biography on Michelle Obama. The text details Michelle Obama’s life from her early years living with extended family in a tiny Chicago house to her role as First Lady and beyond. Moss’s narrative writing is easy to read and really brings Michelle to life but does, of course, take some liberties as readers follow Michelle through her days that include imagined thoughts and conversations. Interesting back matter includes a section called “Become a leader like Michelle! 10 Key Lessons from Michelle Obama’s Life” that highlight points like, “Not everyone needs to believe in you if you believe in yourself,” and “New friends can help you grow!” along with examples of these points from Michelle’s life. There are also questions to check for understanding and resources for further reading. Sinem Erkas’s illustrations, done in paper, add color and fun to the book. 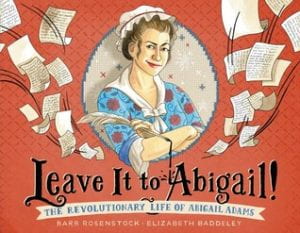 From a young age, Abigail Adams was different from almost every other girl in the colony of Massachusetts. She blurted out questions, lost herself in the pages of books, and ran all around her family’s farm. Instead of marrying a prosperous minister, she insisted on marrying the man she loved: a poor lawyer named John Adams. While John built his law practice, Abigail managed their house and farm and raised their children. As John became increasingly involved with shaping the American colonies’ new system of government, Abigail took on greater responsibilities around home. She supervised farmhands, educated her children, and housed soldiers. She and John also exchanged countless letters in which she shared some of her revolutionary ideas. This lively biography chronicles some of the ways Abigail continued to surprise her contemporaries with her original ideas, strong voice, and constant courage. Baddeley’s pen and ink and watercolor illustrations are interspersed with cross-stitch needlepoint samplers that pay tribute to this popular colonial past time. The book’s final spread highlights other bold women such as Eleanor Roosevelt, Susan B. Anthony, Coretta Scott King, and Gloria Steinem who benefited from the strong foundation of Abigail’s inspirational, revolutionary ideas.

THOUGHTS: Share this with teachers and students to supplement Revolutionary War units. It will also be a good fit for President’s Day or biography projects.