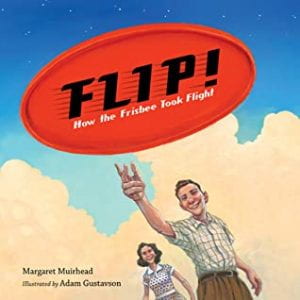 Toss, glide, catch, repeat! Frisbees are some of the top-selling toys of all time, and this title explores their history. In the 1920s, east-coast college kids began flinging empty pie plates from the Frisbie bakery. The fad soon spread from campus to campus. Around the same time, in California, a high school football player named Fred Morrison began tossing a flat, tin popcorn lid with his girlfriend. They were amazed how the lid hovered, dipped, and glided through the air. When the tin lid became too dented to fly straight, the pair experimented with pie plates and cake pans. When someone offered to buy the cake pan from Fred after seeing him tossing it around on the beach, Fred was hooked with the idea of introducing the fun to others. Over the next several years, Fred tweaked the materials for the flying discs and capitalized on America’s obsession with aliens and flying saucers. Eventually, he sold his design to the Wham-O toy company who helped give the toy national recognition. Full-page retro-style gouache illustrations capture the excitement of a game of frisbee from all angles, making readers feel like they are ready to fling the flying disc themselves. An Author’s Note includes details about other colleges that claim to have invented the game of frisbee as well as additional information about Fred’s persistence and creative energy.

THOUGHTS: This title will be an asset to units about inventions, and it also highlights STEM concepts, particularly ideas about creating prototypes and perfecting designs. It also can be integrated into social-emotional discussions, particularly those centering on resilience and perseverance.