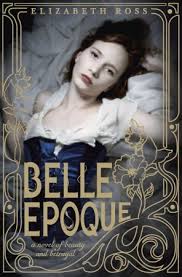 In Belle Epoque, Paris, anything goes, but it’s what “anything is” that leads Maude Pichon to question the truth behind Parisian society.  In her William C. Morris Honor Award debut, novelist Elizabeth Ross integrates the beauty of French noir with the truth of historical fiction.  Maude Pichon has run away from her home in Brittany to Paris to avoid a future bleaker than her present.  With little money and no friends, Maude answers an ad for the Durandeau Agency, an agency that provides services to society women for outings, balls, and other events in which one must look her best.  In other words, Durandeau is profiting off the insecurities of society women by providing them with “foils” – plain women to stand beside their client and make them look more beautiful and desired.  As Parisian society sets up for another “season”, Maude finds herself working for the Countess Dubern, a wretched woman whose daughter Isabelle must never know that Maude is “hired help”.  As Maude begins to befriend Isabelle, she realizes that Isabelle is not her mother, and her desire for knowledge and a future of her own is the same desire that brought Maude herself to Paris.  This is a wonderful story about a time period not often portrayed in YA fiction.  Ross seamlessly connects timeless wants for freedom and independence to a period of history in which these characteristics were incredibly limited for women.  This is a beautiful French bildungsroman.

I am not a French history buff, so I had no idea what Belle Epoque was when I picked up this novel.  In fact, I only started reading it because of the cover art.  I was intrigued by the noir style of the photograph on the cover.  I was quickly pleased to find the story was just as interesting as the cover art (perhaps you can judge a book by its cover).  Maude Pichon is a lovely young girl trying to find her way in a big city.  This seems like a repetitive story, but set in Belle Epoque Paris, it takes on a beauty that is not always found in coming-of-age YA fiction. It is hard to explain, but Maude seems so true, not innocent, but something about her grasped me as the reader and made me want to continue with her story.  She makes tons of mistakes, but her flaws are what make her real.  I also loved Ross’s characterization of the Countess Dubern, a woman who has everything and yet has nothing.  The realism of this historical piece is what hit me immediately.  This story could happen today: a “fake friend” with a horrible mother-daughter relationship; a realization that I can do more for myself, and a friendship out of nothing.  Yet, set in Belle Epoque gives it a magic that is not found in our society today.

As a curriculum tie-in, I might suggest this to a French teacher to pull in aspects of French history and culture.  Students may not need to read the entire novel, but the settings and descriptions of repoussoirs are very interesting and will add to students’ general knowledge of French historical culture.  This is also a wonderful book for literary analysis, especially if using contemporary fiction.  It is a great novel for questioning how literature reflects life, especially historical fiction.