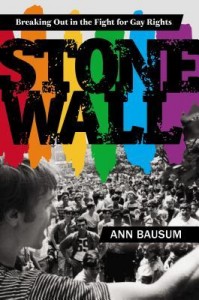 A thorough history of the gay rights movement from the 1960s on, this book examines the social climate and discrimination leading up to the Stonewall riots and gives a riveting, unbiased account of the riots themselves which includes photographs and eyewitness quotes.  The book goes on to analyze the advancements made and setbacks suffered by gay rights activists following the riots.  The author pays particular attention to gay pride marches, the AIDS epidemic, and hot-button issues such as gays in the military and gay marriage.  Source notes and a bibliography are included at the end of this excellent addition to LGBT nonfiction collections.

This book reads more like a story than other LGBT nonfiction selections on the market.  The use of photographs and quotes from actual eyewitnesses to the riots really makes readers feel like the event is unfolding right before their eyes.  I would definitely recommend this title to those looking to build a collection on the history of gay rights.  It would pair nicely with Betsy Kuhn’s Gay Power!: The Stonewall Riots and the Gay Rights Movement, 1969 or with any of David Levithan’s fiction selections. I should warn potential buyers, however, that the information on gay marriage is already outdated, as the book was published prior to the nationwide legalization of same-sex marriage in June of 2015.