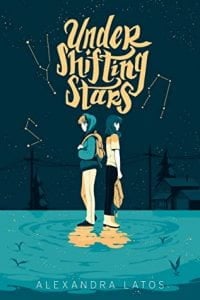 This well-researched series provides an easily understandable, comprehensive exposition of the LGBTQ community, its difficulties, and its successes. In Growing Up LGBTQ, by Dr. Duchess Harris with Rebecca Rowell, the authors focus on LGBTQ teens navigating their gender identity with compelling language and plentiful real-life explanations. The book acts as a primer with each chapter covering a different issue facing LBGTQ and ending with brief list of discussion questions. An interesting topic is a description of stores that engage in “gendering materials,” separation of traditional boy and girl products like clothing and toy and heightened prices for “girl” toys. The authors list the various ways LBGTQ* teens suffer from discrimination in the health care field, among law enforcement, in the homeless community, and in prisons. This particular book reinforces the need for LBGTQ teens to feel the support of family and school in order to find their voices. It concludes with with a discussion of the protests and the consequences around Title IX, its advances and its demise under the Trump-deVose administration. Complementary photographs and informative textboxes interspersed touch on topics like microaggressions, same-sex marriage, and more. Though the slim volume doesn’t go in-depth on any topic, it does give a lively, simple overview of being a LGBTQ teen. Includes a glossary, suggested resources, and an index.

THOUGHTS: Middle-school students as well as reluctant high school readers doing research papers or projects will make good use of these short, information-packed books. They also will benefit gender-curious youth because the authors don’t seem to have missed any issue. Being LGBTQ+ and a person of color and asexuality are also briefly addressed. I wonder if the title will be revised to read LGBTQ+. 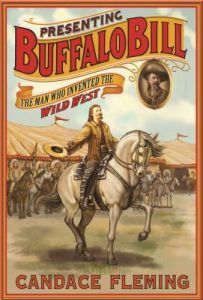 William “Buffalo Bill” Cody is perhaps the most famous figure of the “Wild West.”  In this biography, Fleming examines the legendary figure and attempts to separate fact from myth.  According to Cody’s own autobiography as well as the Wild West show he created, life on the American frontier was never dull; rather, it was full of gunfights, raids, racing horses, and skirmishes with Native Americans.  Although there was a great deal of violence in the West, this exciting image fabricated by Cody is not entirely true.  Comparing Cody’s account of the Wild West to other primary source materials, Fleming attempts to address the inaccuracies. Beginning with his childhood, Fleming presents a thorough account of Cody’s life up through his tours with his Wild West show and his death.  Complete with a bibliography, source notes, and period photographs, this compelling title gives readers an objective look at frontier life and the legendary figure known as Buffalo Bill.  THOUGHTS: This is an outstanding addition to any middle or high school U.S. history collection.  Not only does the fast-paced, story-like narrative keep the reader’s attention, but I could see the book being used in the classroom in a variety of ways.  It provides an excellent introduction to important events, issues, and establishments in U.S. history, such as the Civil War, the Pony Express, Bleeding Kansas, slavery, and Native American relations.  I could also see it being used to introduce historical research.  Fleming’s sidebars describing the inaccuracies in many of Cody’s stories are intriguing and set the stage for additional research and debate.  A definite must-have for school library collections. 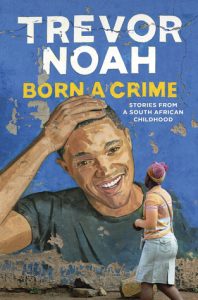 Trevor Noah, best known as host of The Daily Show, delivers a memoir that’s both moving and humorous. He’s a comedian, after all!  Noah was “born a crime” in 1984 to his South African mother and Swiss-German father; under apartheid, their relationship and their son’s very existence was illegal. Each chapter opens with a little background on the author’s home country, including the mechanisms of apartheid, the role of language in South Africa, and the quagmire of racial identity in a former police state. Noah then relates youthful episodes, escapades, and misadventures, with his close relationship to his mother anchoring the entire narrative. The book’s final and most gut-wrenching chapter chronicles his mother’s marriage to an abusive man, which nearly ended in her murder. THOUGHTS: Trevor Noah is a popular TV personality, but this exceptionally well-written book demonstrates that he is also a gifted author.

Trevor Noah narrates Born a Crime on audiobook, and his gift for impressions and accents makes it a must-listen. Play the excerpt in which Noah gets his hair straightened for the first time, and I guarantee there will be a holds list for this book! 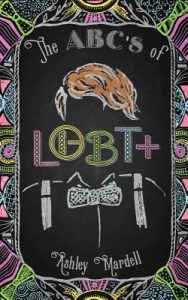 Popular blogger and YouTuber Ashley Mardell gives readers a crash course in LGBT+ terms, identities vocabulary, and labels. Designed for all, from novices to experts, Mardell starts off with a very thorough cheat sheet of terms used throughout the book which readers can refer to at any time. Readers then dive into informative and easy to understand chapters focused on spectrums, sex and gender, and sexual and romantic identities. Mardell successfully brings a voice to many LGBT+ identities that are not portrayed in mainstream media and offers personal anecdotes and drawings throughout to help engage the reader. THOUGHTS: An excellent nonfiction title that brings visibility and voices to all identities and strengthens the field of gender and sexual diversity. 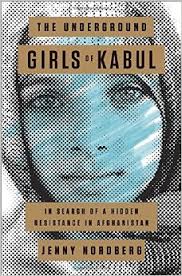 Jenny Nordberg, an investigative journalist, has written an engaging and extremely timely account of the lives of women in Afghanistan and the practice of transforming young girls into bacha posh. This phenomenon, found in some misogynistic cultures in which women are entirely controlled by men, involves dressing up young girls as boys in order to grant honor and prestige to a family that does not have any male children, or to allow the “male” child to escort the mother or daughters when in public. This illusion allows a family to save face in the community, and for the girl to be able to go out in society and complete activities normally open only to young boys. Nordberg discusses a few different instances in which this occurs but focuses much of her story on the life of female parliamentarian Azita and her young daughter turned bacha posh, Mehran. Azita is a strong and intelligent female, but she is hindered by her illiterate husband, his other wife (polygamy is common in Afghanistan), and her status as the mother of only young girls.  Though Azita has her flaws, the reader wants her to be able to rise above her current situation.  Nordberg must use her skills as a journalist to locate and interview many bacha posh, because though the lifestyle is common it has not been formally documented. By sharing their stories, Nordberg comments on and questions the treatment of women in a male-dominated society. She also highlights how the bacha posh struggle to define their own identities when they must revert back to being women.  Nordberg provides enough history of the wars in Afghanistan to give the reader an understanding of the women’s lives but does not bog down her story with facts and figures. She lets the interviews with the various bacha posh drive her narrative. The sheltered lives that women lead in Afghanistan will astound most modern young women in the western world and hopefully lead to discussion and action towards assisting women in this country.

This is one of the best non-fiction books that I have read in quite awhile. Not only does it discuss the daily lives of women in Afghanistan, but it also highlights a unique part of their culture that had never been brought to my attention before. Though I had a general understanding of the plight of women in Afghanistan and other Middle Eastern nations, the firsthand accounts were much more powerful than just hearing general reports on the nightly news. This book would be an excellent addition to a social studies unit discussing Afghanistan or women’s issues in the Middle East. This would also be an interesting pairing with the fiction book that I am currently reading, The Pearl that Broke its Shell by Nadia Hashimi. There are some difficult themes and scenes in this book (especially with regards to physical abuse of women), but since the characters are young women and Azita herself is only 28, teens can relate to them and understand their hopes and dreams of better lives for themselves and for the other young girls in Afghanistan.