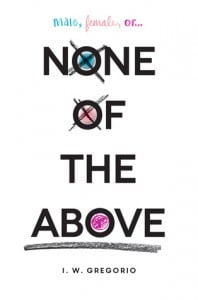 Senior Kristin Lattimer seemingly has everything going for her: two best friends, a track scholarship, a heart-melting boyfriend, and the homecoming queen crown.  But a painful first sexual experience prompts her to see an OB/GYN, who drops a devastating bombshell: Kristen is intersex.  The doctor’s assurances that she’s still female despite her XY chromosomes, gonads and lack of uterus are drowned out once Kristin’s entire school finds out she’s a “hermaphrodite,” a cruel, outdated term used by bullies that the author points out is considered derogatory.  Although the plot can be somewhat predictable, this is a noteworthy resource about a unique condition and the meaning of gender.  Kristin’s journey is an empowering story to which any high school student who doesn’t quite fit in can relate.  Scenes describing sexual situations and underage drinking make this a pick more fitting for older high school students.  Gregorio enters barely charted waters with this title, but it would pair well with other books about gender and acceptance, such as Brian Katcher’s Almost Perfect, about a transgender teen.