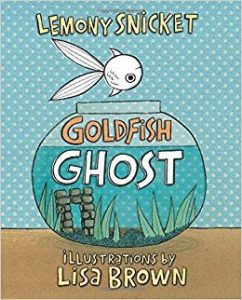 Goldfish Ghost is born in a bowl in a boy’s bedroom, but after floating and staring at the ceiling for a while, he becomes bored and drifts through the air towards the room’s open window in search of some company. He floats over the town’s fishing pier, past some shops, and near the haunted lighthouse. He considers befriending a flock of seagulls, but they are too noisy and are preoccupied with the fishing boats. Everyone he passes in town already has a companion, so he drifts toward the beach. All the beachgoers are busy reading, sunbathing, digging, or swimming, and no one pays him any attention there either. He does spot the ghosts of deceased sea creatures floating over the water, but Goldfish Ghost doesn’t feel quite at home on top of the ocean either. As night falls, Goldfish Ghost hears a voice calling to him from the haunted lighthouse. The ghost of the lighthouse keeper scoops him up, each recognizing that they finally have the sort of company they’ve been searching for. This title’s India ink and watercolor illustrations are filled with fun visuals including families enjoying a day at the beach and people navigating through a seaside town, and students will likely spot new details each time the book is reread. Observant readers will also spot other ghosts, including some old-fashioned beachgoers, in the detailed illustrations.  THOUGHTS:  Although this story’s main character is a ghost, this is not the typical creepy, scary ghost story. Instead, it’s a story about finding friendship and a place to belong. It also presents a fresh perspective about dead pets and will be a winner with readers who enjoy slightly eerie yet comical stories. 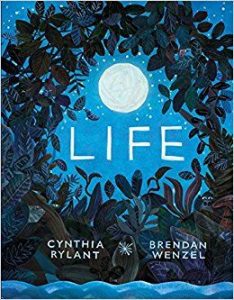 This book beautifully pairs Cynthia Rylant’s lyrical text with Caldecott Honor-winner Brendan Wenzel’s stunning paintings of the natural world and its many animals. The result is striking; a concise, yet powerful tribute to life’s many twists, turns, mountains, valleys, and surprises. Each page contains only a line or two of text, letting Wenzel’s vibrant paintings shine. The book begins succinctly, noting that life begins small. Following pages depict a baby elephant and a tiny seedling growing beneath the sun’s rays and the moon’s glow. Several animals express what they love most about life, describing simple things such as sky, grass, sand, and rain. Subsequent pages depict how life might not always be easy or beautiful, showing animals braving dark skies, fierce winds, craggy mountains, and thorny underbrush. But eventually, the wilderness ends, and new roads are visible. In a beautiful spread featuring a deer watching a flock of birds fly across a moonlit sky, Rylant reminds readers that life is always changing, and it’s worth waking up each morning to see what a new day holds.  THOUGHTS: This inspirational book can be shared with guidance counselors who could perhaps use it to reassure students who are having a challenging time or who are facing some obstacle in their life. It will also be a good fit for units exploring animals and their many habitats, and it shines as an example of how to boil writing down to just the most essential words and ideas. 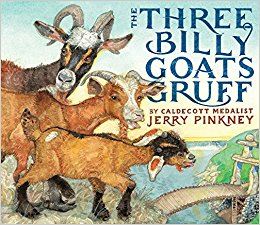 With beautiful pencil and watercolor illustrations and a freshly-imagined ending, Jerry Pinkney breathes new life into this classic tale. Many original elements remain: three billy goats wish to cross a troll-guarded bridge so they can graze on the opposite river bank’s green grass. The littlest billy goat goes first, and he convinces the troll to spare him, promising a bigger billy goat will be crossing soon. His prediction is correct, and soon, a second goat attempts to cross. The troll threatens to gobble him up, but he urges the troll to wait for Big Billy Goat Gruff. Sure enough, Big Billy Goat Gruff comes crashing across the bridge, and when confronted by the troll, he lowers his head and charges, knocking the troll into the water. In the water, a giant fish demands to know who is splish-splashing in his river, and he threatens to gobble up the troll. The troll escapes and paddles back to the riverbank. He finds himself on the opposite side of the river, however, and he watches as the entire herd of billy goats crosses over the bridge to eat the green grass on the hillside. Careful readers will notice that this is not the end of the story, however. On the last page of the book, the troll begins gathering stones to build himself a new house, and the littlest billy goat races over the bridge to help him. The final endpapers depict goats traveling freely back and forth across the bridge, as well as other goats coming to assist the troll with his building, suggesting that these characters might ultimately work out a peaceful coexistence.  THOUGHTS:  This stunning retelling is destined to become a classic, and readers will pour over the artwork again and again. The reimagined ending offers readers the chance to experience bullying from a fresh point of view, and it opens the door for discussions about big ideas such as confronting adversity, forgiveness, redemption, and tolerance. This will be a valuable addition to all elementary collections. 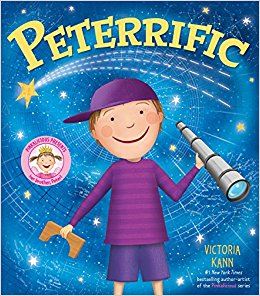 Pinkalicious is back, but this time, her brother Peter is the star of the story. Peter’s goal is to build a block tower high enough to reach the stars, so while he builds, Pinkalicious borrows wagon-loads of blocks from all the neighbors. Peter’s tower grows and grows, but once he’s high in the sky, he realizes it can be lonely, and a little scary, at the top. When he spies a high-flying bird passing by, Peter brainstorms an idea for leaving his tower, and once he reaches the ground, he’s quick to imagine ideas for how to construct an even better one. There’s lots to look at in this book’s brightly colored mixed media digital illustrations, and readers will enjoy spotting trains, a slinky, crayons, binoculars, and other toys tucked in among the blocks of Peter’s growing tower.  THOUGHTS: This book is perfect for teaching elements of Design Thinking since Peter works through Asking, Imagining, Planning, Creating, and Improving as he builds his tower. He begins by asking himself how he might create a tall, tall tower. Then, he imagines designing a structure tall enough to reach the stars, and he plans by drawing pictures of his ideas. He uses blocks, tape, rope, and glue to create and hold together his tower, and he continuously adds more blocks so he can improve his design. Once he’s at the top of the tower, he also realizes the tower has some problems: there’s no way to get down, and it might be structurally unsafe. Once he’s safely on the ground again, Peter draws a plan for a new and improved tower, underscoring the ideas in the circular Design Thinking process.