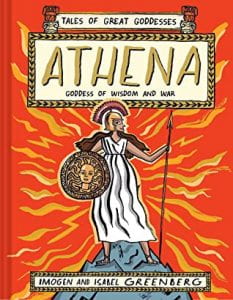 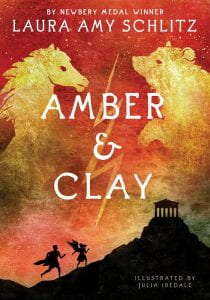 Told in the alternating voices of Rhaskos and Melisto, this book transports readers to the richness of life in Ancient Greece. Rhaskos is a Thracian slave, serving his masters and making his way through the world with his wits, his passion for art, and his camaraderie with donkeys. Melisto is the daughter of wealthy Greek parents who, try as they might, cannot stifle her wild spirit within the confines of a weaving room. They lead incredibly different lives, but their paths cross when Rhasko’s mother appears in Melisto’s house as a slave. Brightly drawn and multi-dimensional, these two Greek youths are easy to like, even if they are not always easy to understand, and readers will cheer for them when they finally meet and work together to fulfill their destinies.

THOUGHTS: This is the latest offering from Newbery-prize-winning author Laura Amy Schlitz, and it does not disappoint with its lyrical prose and abundant historical details. Full of ancient Greek culture, references to gods, goddesses, and the philosopher Socrates himself, fans of Greek mythology will be happy to immerse themselves in the time and place of this story. 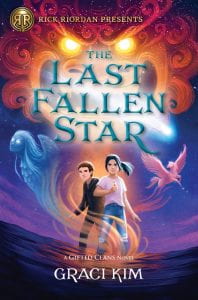 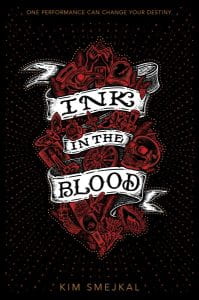 Celia and Anya were chosen by the Divine. Inked on the ankle with a thin band, a band that appeared out of nowhere, the girls were marked for service. Once a mark appears a child leaves their family, their community, and everything they’ve ever known to answer the Divine’s calling, a life spent inking magical tattoos on strangers that would direct them to their destinies. But this life is not all it’s cracked up to be; there are flaws in the system, loopholes to be exploited, and Celia and Anya must find a way out. When an opportunity arises to escape, to join a close-knit troupe of performers as they travel the land, the girls jump at the chance. Despite a lack of theater skills and nothing to perform, the girls audition using an act featuring an angel and a devil, a performance so good not only will they become members but they’ll eventually incite riots and incur the wrath of the Divine herself.

THOUGHTS: Ink in the Blood is a fantastical tale of the connections that rule our lives, the bonds we form that define us, and the strength it takes to change.