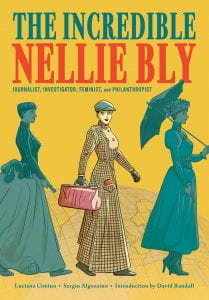 The subtitle of this wonderful graphic biography of Nellie Bly lets readers know that they are about to learn the life story of a true trailblazer! Nellie Bly is maybe most famous for going undercover in 1887 at an asylum for mentally ill women, exposing the horrible treatment patients received there. Her 1889 trip around the world in just seventy-two days is also very well-documented. Within the frame of a series of conversations between a female student at Columbia University’s Journalism School and an elderly Bly, The Incredible Nellie Bly covers these and her many other impressive accomplishments. Such achievements include reporting “in disguise” from a factory and debunking stereotypes about the “immoral” women workers there, interviewing Belva Ann Lockwood (the United States’ first female presidential candidate), and reporting from Europe’s Eastern front during World War I. Her trendsetting celebrity, and the inevitable backlash, are also depicted. Sergio Algozzino’s digitally created artwork, in appealing shades of yellow and blue as represented on the cover, evokes the times in which Nellie Bly lived and worked.

THOUGHTS: This is a – yes – incredible introduction to the extraordinary life and legacy of a woman who never accepted society’s restrictions but was “forever the author of her own destiny” (from the Introduction). 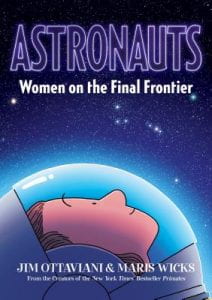 From page one this graphic novel challenges sexist thinking showing an astronaut taking off their suit to reveal Mary Cleave, one of the first women in space. Throughout the story astronauts like Mary Cleave and Valentina Tereshkova work hard and accomplish many feats despite the sexism they face in their daily lives. At one point John Glen and other famous male astronauts laugh at the possibility of having women join men on space missions. The story explores the diverse paths that led these astronauts to their jobs at NASA and the impressive talent, work ethic, and intense training these astronauts had to be able to operate a spaceship. The illustrations are fun, and the format allows readers of all abilities to be introduced to the incredible science behind space exploration. After reading about the lives of these trailblazers, readers will be inspired to overcome obstacles, seize opportunities, and pursue their passions.

THOUGHTS: A good addition to any graphic novel collection. The story will be appreciated by readers of nonfiction and graphic novels and will encourage readers to learn more about space flight and the history of women in space.