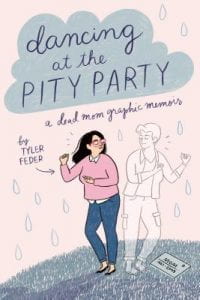 During the summer after her freshman year at college, Tyler Feder’s mother was diagnosed with ovarian cancer. By spring break of her sophomore year, Rhonda had died. Tyler understandably felt rudderless, “like I was on an iceberg out to sea.” Her mom was gone … now what? Chapters tenderly portray the diagnosis, the death, “making arrangements,” sitting shiva, and navigating a new normal. Dancing at the Pity Party is every bit as heartbreaking as it sounds, but it is also a little bit celebratory (as the title suggests). Readers will come to know and care for Tyler’s mom, because her loving personality is so vividly present on every page, even in her absence.

THOUGHTS: This is a must-read for teens who have experienced a loss, who want to support a grieving friend, or who are struggling and just want to know that someone out there gets it. Readers of Lucy Knisley’s introspective graphic memoirs will love this one, too. 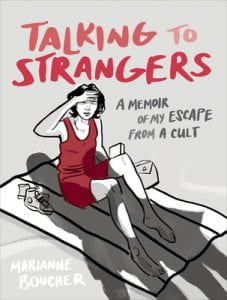 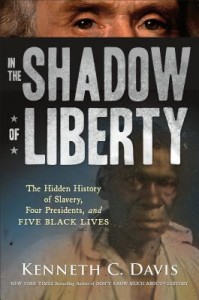 Davis shines light on five lesser-known individuals of American history in In the Shadow of Liberty.  They were five enslaved persons (Davis explains the preference for enslaved person rather than slave) who were owned by four presidents who espoused liberty for all.  Billy Lee served as George Washington’s valet.  Ona Judge worked as Martha Washington’s maid and successfully escaped.  Isaac Granger served at Thomas Jefferson’s Monticello all his life.  Paul Jennings worked at both James Madison’s Montpelier and the White House. Finally, Alfred Jackson served Andrew Jackson’s household.  Davis gives a succinct history of slavery and its profitability before detailing each person’s story.  Between chapters, he skillfully places timelines to explain national events and how slavery was affected.  The research is thorough and though Davis could be judgmental, he opts instead for a factual perspective.  “It would be…simple to condemn them…and to call them hypocrites and negate all they did…But history is never a simple tale.  The story…is a complicated one.  At times, some of them agonized…some of their views and behavior changed, though never enough to make a difference.  We must take these hard, cold facts into account” (261-262).  This is a finely written history of interesting people in difficult, at times horrifying, circumstances.  Davis’ writing pulls in the reader and gives life to these five little-mentioned people.  THOUGHTS:  This history gives fuller understanding of the times and (often contradictory) views held by early American leaders.  Social studies courses could include the entire text or portions of it (consider chapter one, with its succinct history of slavery) to better understand the wide impact of slavery on individuals and a nation’s psyche.  This is accessible reading for middle and high school to give another view of colonial life and the abolitionist fight.  It serves as a fantastic example of biography and narrative nonfiction.  This could also be paired with Albert Marrin’s A Volcano Beneath the Snow: John Brown’s War Against Slavery (2014). 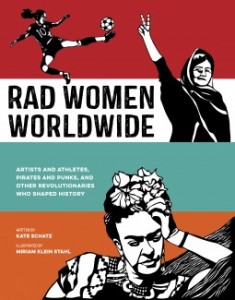 Rad Women Worldwide contains forty mini-biographies, representing all seven continents and describing the achievements of truly radical women in lively, conversational profiles. The very helpful map on the book’s front endpapers will orient readers to this journey through time and around the globe. Rad Women Worldwide covers contemporary women such as Malala Yousafzai, Venus and Serena Williams, and primatologist Biruté Mary Galdikas. There are also plentiful entries on historical figures: Enheduanna (the world’s oldest known author), Hypatia (the first known female mathematician and scientist), Queen Lil’uokalani of Hawaii, and many more. Each chapter is accompanied by an iconic papercut portrait, created by illustrator Miriam Klein Stahl using paper, pencil, and an X-Acto knife. “The Stateless,” a poetic ode to the world’s 60 million displaced people (almost 80% of whom are women and children) is a fitting conclusion to this excellent collective biography. One small complaint: if the map and Table of Contents included keywords such as Educator, Environmentalist, or Musician next to each woman’s name, Rad Women Worldwide would be even more accessible to browsers and student researchers. THOUGHTS: It’s a must-have for every teen library and a strong companion read to Schatz and Stahl’s 2015 collection Rad American Women A-Z. 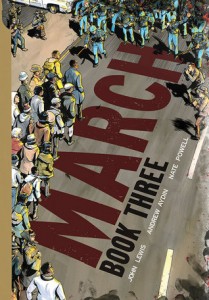 March Book 3 is a powerful conclusion to Congressman John Lewis’s graphic memoir of his experiences during the Civil Rights movement. Books One and Two focused on the lunch counter sit-ins and the March on Washington, respectively. The plot of the third book centers around the events and marches in Selma, Alabama.  Lewis also shares his experiences traveling to Africa and meeting Malcolm X, and the struggles within the different groups pushing for change at that time. The art, drawn in careful detail by Nate Powell, propels the story forward at a fast clip and engages the audience with stark black and white scenes. This series should be required reading in all high schools, not only because it is engaging in a way that textbooks generally are not, but also because the themes and events are, sadly, exceptionally relatable to the events occurring in our world today. THOUGHTS: Students and educators alike will be fascinated by Lewis’s story and experiences. This series should be in all high school libraries.

I have eagerly awaited the final installment of this series, and it did not at all disappoint. Reading John Lewis’s graphic memoir has opened my eyes to the power of this form of literature, and how it can be used to engage readers and teach about different eras in history. I also had the opportunity to attend an event with Congressman Lewis, Andrew Aydin, and Nate Powell. The Congressman gave one of the most powerful speeches I have ever witnessed. Hearing his story in person, and the story behind the graphic novel, made me appreciate the venture even more than before. I hope that more famous and influential individuals will use this genre to tell their stories in order to reach a whole new audience and generation. 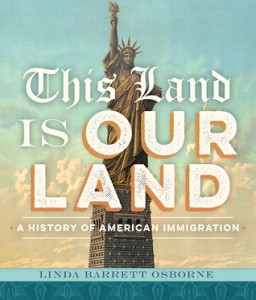 Focusing on American immigration from the 19th century to the present, this title presents the experiences of immigrants who came to America to start new lives and examines the way Americans have responded to these immigrants over time.  Surprisingly, attitudes towards immigrants have remained remarkably similar and consistent throughout the history of America.  Osborne offers context and reasons for these attitudes while at the same time highlighting the benefits that immigrants have brought to our country and encouraging fairness and compassion towards all.  Numerous period photographs and quotes from immigrants themselves adds a personal touch to the work.  A timeline of immigration history, source notes, bibliography, and index are also included.  Overall, this is a very thorough and objective account of American immigration throughout history.  THOUGHTS: With the upcoming presidential election, immigration is a very timely topic.  This title provides a wonderful introduction to the topic and could spark excellent discussions about attitudes and responses towards immigration.  Another option would be to pair this title with fictional accounts of the immigrant experience, such as Melanie Crowder’s Audacity or Margaret Peterson Haddix’s Uprising.