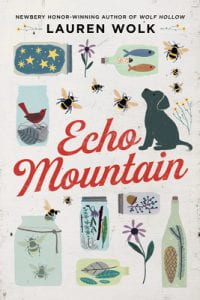 Like her award-winning novel, Wolf Hollow, Lauren Wolk repeats her lyrical style in the historical fiction work, Echo Mountain. Ellie, the twelve-year-old narrator, and her family have moved to a remote part of Maine when the Great Depression hits. With his able middle child at his side, Ellie’s father builds their cabin. Her mother, a music teacher, puts down her mandolin and picks up the ceaseless household chores that come from being poor and living off the land–tasks older sister Esther endures but detests. The little brother, Sam, is impetuous and lively; the mountain is the only home he remembers. When the novel opens, Ellie’s father has been in a coma for months. While clearing land, he is felled by a tree. The details of this accident form Ellie’s dilemma and burden. A thoughtful girl, Ellie keeps still and accepts the blame for her father’s injury while always searching for natural remedies that will jolt him from his oh too silent sleep. While on these scavenger hunts, Ellie is surprised by tiny carvings of animals where she walks and believes someone is leaving them for her. These tokens are more meaningful for Ellie because they make her feel noticed, something she needs since her father’s accident. Of necessity, she’s a loner on the edge of childhood, and the story that ensues brings her to the brink of young adulthood. One day, a matted-haired dog appears at the edge of Ellie’s property, and she follows it to the other side of the mountain where the more established folks live. There she discovers the cabin of Echo Mountain’s legendary “hag,” feverish in her bed, in a room with carving tools and jars of herbs and medicinal cures. With the guidance of the hag–who is a healer– and the help of Larkin, the woman’s grandson, Ellie shows extraordinary resourcefulness in doctoring the old woman and her own father. The situation weaves the threads of the story tightly together with the kind of coincidences that deliver a wondrous tale. This quiet story of resilience during difficult times tells of a family who, in Ellie’s words, “…went looking for a way to survive until the world tipped back to well.”

THOUGHTS: This book concentrates on personal issues, rather than global ideas. Sensitive middle school students who like to wrap themselves in multi-faceted characters will gravitate to Ellie. It also provides a study of the dynamics of relationships: how Ellie relates to her mother and sister; how the different neighbors either share or refrain from sharing; how rumor feeds the negative attitude of the mountain people toward the hag; how humans deal with guilt and remorse. Similar to books like The Line Tender by Kate Allen and The War That Saved My Life by Kimberly Brubaker Bryant. 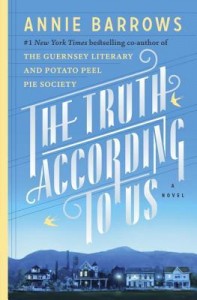 Though marketed mainly for adults, this new novel by Annie Barrows will appeal to teens who enjoy character-driven and historical dramas. Set in the fictional small town of Macedonia, WV, in the summer of 1938, the novel focuses on one family, the Romeyns, whose simple lives are uprooted when Layla Beck comes to board with them. Layla has been cut off by her Senator father, and her uncle gets her a job through the WPA to write the history of Macedonia. Living in the family home are Jottie, the eldest sister and matriarch of the family, her gallivanting brother Felix, his two daughters, Willa and Bird, from a divorce, and twins Mae and Minerva (who are both married but choose to spend a majority of their time living in the family home). The family’s father used to run the local mill, American Everlasting, but the reader slowly learns why the family is no longer associated with the mill. The novel is told through twelve-year old Willa’s first person narration, letters from Layla to her family, and third person from the point of view of Layla and Jottie, who also recounts frequent memories from her youth. Jottie was in love with Felix’s best friend Vause Hamilton, whose tragic death at a young age haunts the family and guides the plot through the long hot summer of 1938. As Layla uncovers the town’s history, Willa discovers more about her secretive father (and aims to protect him from a budding relationship with Layla). Jottie wrestles with loyalty to her brother and happiness for herself. The passages from Willa are enjoyable and reminiscent of Scout’s voice in To Kill a Mockingbird. Jottie’s memories are heartbreaking and powerful. At its heart, this is a family drama that takes readers back to a simpler time while encouraging them to think on their own familial relationships and how simple actions and events change the course of our lives forever. I highly recommend this to teens who enjoyed To Kill a Mockingbird. This is a definite must for all high school collections.

I truly enjoyed this novel. Not only because I could relate to living in a small town in West Virginia, but also because Barrows is such a gifted storyteller and her characters are so interesting. None of them are perfect, and it is their faults that make them interesting and unique to the reader. This would make an excellent choice for a book club to read, as the actions and opinions of the characters could be constantly debated and argued for or against. I look forward to reading future titles by this author.