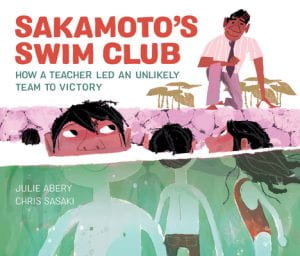 In the 1930s, children on Maui played in the irrigation ditches lining the Hawaiian island’s sugar cane plantations. Local science teacher Soichi Sakamoto took an interest in training the kids in proper swimming techniques, reinforcing their “pace, rhythm / strength, speed.” After the sugar company built a community pool, Sakamoto and his swimmers formed the Three-Year Swim Club with hopes of competing at the Olympic Games. World War II forced the cancellation of the 1940 Summer Olympics, but Coach Sakamoto’s athletes continued to train, and one of them won a gold medal (and set records) at the 1948 Olympics in London! Author Julie Abery tells this true story in short passages of rhyming verse that are packed with meaning. For example, on the page representing the start of WWII with smoke over an empty lap pool, she writes, “Dawn raids shatter / peaceful skies. / Athletes answer / country’s cries.” Chris Sasaki’s illustrations depict smiling young swimmers churning through the water, as well as the beautiful colors and natural wonders of Maui.

THOUGHTS: True stories of athletes overcoming long odds are always popular; this one is also a great example of illustrated nonfiction for young readers. 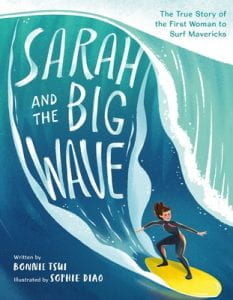 Sarah Gerhardt grew up surfing little, medium, and big waves (her favorite!) on Oahu’s North Shore, which is famous for its huge waves, some of which top the height of a five-story building. As one of just a few girl surfers, Sarah struggled to find the right size surfboards and wetsuits; luckily, she found a circle of friends that included a surfboard shaper who made boards that were just right for her. She later moved to California, where her new home was near Mavericks, the famous big-wave surf break. With its monster waves, “Mount Everest meets Niagara Falls” was a dangerous place to surf, and no woman had ever done it … until Sarah! Illustrator Sophie Diao captures Sarah’s history-making ride, and its epic scale, in a made-for-storytime flip-up page. Throughout Sarah and the Big Wave, Diao’s digitally rendered artwork beautifully captures the ever-changing colors of the ocean and the power of its biggest waves. A timeline of milestones in the history of women and surfing complete this fantastic picture book biography. 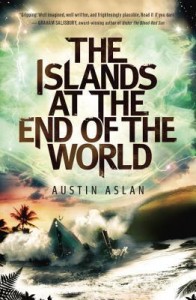 Sixteen-year-old Leilani is the daughter of a native Hawaiian and a professor at the University of Hawaii.  Leilani has never fit in because of her mixed heritage and her epilepsy.  At the beginning of this novel, she and her father (Mike) have traveled from the big Island of Hilo to Oahu.  Leilani will be participating in a research study for a promising new medication that might control her epilepsy, and she is hoping for a seizure-free future.  While they are in the city of Honolulu, tsunamis hit the Hawaiian Islands’ Eastern Shore.  The tsunamis are followed by a strange green “presence” in the sky.  The residents of Oahu have named this phenomenon the Emerald Orchid.  These unusual natural events are accompanied by the catastrophic failure of power and communication systems.  Native Hawaiians begin to turn on tourists in a fight for meager resources, and those who are trapped in Honolulu are moved to military-run refugee camps.  After spending weeks in the refugee camp, Mike and Leilani realize they must escape if they ever want to get home.

The journey home seems impossible.  Nothing works, and anything that does function comes at a dear price.  Leilani is running out of her epilepsy medication, and there is danger around every corner.  When Leilani has a seizure, she experiences strange dreams and hears voices.  Her experiences hint at some kind of connection between her epilepsy and what is going on in the outside world.

The Islands at the End of the World is a wonderful book in many ways.  Leilani is courageous and special, while being a typical teenager in other aspects.  The relationship between Leilani and her father is loving and filled with mutual respect.  Themes of Hawaiian religion, mythology, and culture run throughout the book and the Hawaiian language is used throughout the book, giving the story a real sense of “place”.  This is the first volume in what will be at least a two-book series, and students will certainly want to see how Leilani’s story ends.

As a word of warning, there are a few YA moments in the book including a marijuana smoking scene between father and daughter.  However, this book is so different and enjoyable; it should still be a part of your library anyway.