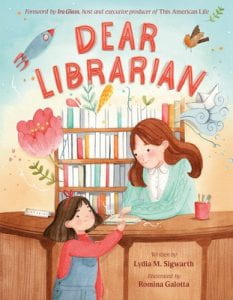 When Lydia and her large family move from Colorado to Iowa, she misses many things. Most of all, she misses having a home. In Iowa, she doesn’t have a home: just houses. Her family spends some days living at an aunt’s house, some days living at a cousin’s house, and some days living at her grandmother’s house. She doesn’t feel at home anywhere, until her mother takes her to the library. The library has sunny windows, rows of books, baskets of toys, and best of all, a kind librarian. The librarian takes time to listen closely, locate perfect books, read stories, and give warm hugs. In the library, Lydia finally finds her own special home. Even when her family eventually moves into their own house, Lydia continues returning to the library to see her special friend. Her many visits even inspired her current career as a children’s librarian. An introduction by Ira Glass, host and producer of This American Life, details how Lydia Sigwarth’s story originally premiered on his radio show. Listeners liked it so much that Lydia decided to write her own version of the story, which is this autobiographical picture book.

THOUGHTS: The book’s final pages include an author’s note explaining that this story is based on what really happened to the author while she and her family were homeless for six months when she was a little girl. The note also details how in 2018, the author reconnected with her childhood librarian with the help of the radio show This American Life “664 The Room of Requirement Act Three: Growing Shelf-Awareness.” This gentle story describes one little girl’s experience with homelessness while also celebrating the power libraries have to create safe, welcoming spaces for all people. This title will serve as a memorable discussion-starter during elementary morning meetings. 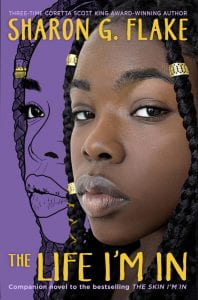 In Sharon G. Flake’s best selling novel, The Skin I’m In, Charlese–Char–Jones is the confident bully wreaking havoc on the life of the diffident and vulnerable Maleeka. In The Life I’m In, African-American Char appears as the main character, still inwardly grieving for the loss of her beloved parents, and continuing to make bad decisions. Her older sister and guardian, Juju, has begun to get her life together–stopping the house parties and securing a job in a bank–and needs Char–sixteen and a seventh-grade drop out–to live with their grandparents in Alabama. At the start of this reluctant bus trip, Char is flippant and rude, comical and outspoken. The passengers are alternately annoyed and amused by her unself- conscious antics. When young, white mother, April gets on the bus with her three-month old biracial baby, Char’s maternal instincts urge her to assist April. Bound for a job, April shows the distressed signs of living rough on the streets. To provide for her child, she sells narcotics and sexual favors to truck drivers; she suppresses suspicion about this new employment that requires she pay for the position. When April disembarks the bus with baby Cricket in tow, naive Char decides she will go out on her own and not continue to Alabama. Thinking it is temporary, she volunteers to take care of Cricket when April’s aunt never shows up at the bus station and well-dressed and smooth talking Anthony arrives as April’s ride to Florida. Char enlists all her resources to persuade a hotel proprietor to rent her a suite; she figures out and procures the necessary baby supplies with the money from Juju; she contacts Juju and even the newly reconciled Maleeka to tell them of her actions if not her whereabouts. Char may talk a good game, but she is young, inexperienced, and a virgin. When Char’s funds dwindle and her efforts to find work are hindered by her motherly duties, she runs into Anthony again and, in an attempt to save Cricket, finds herself a victim of sex trafficking. Author Flake describes the depravity of Char’s existence during this time delicately, but does not stint on the truth. Char receives some solace in the community of other girls in Anthony’s pack, who seem to be of different races and backgrounds. When she eventually escapes and is reunited with Juju, Char needs the help of not only her sister, but also Maleeka, her former teacher, Ms. Saunders, and professionals to survive the trauma and feel truly free. The fluid text reflects Char’s actual voice, and her first-person narration gives an intense look into her complex feelings and her maturity as she tries to survive under egregious conditions. Although the stress and suffering Char conveys is painful to read about, readers will find this a compelling book.

THOUGHTS: This is a harsh story to tell, and Sharon Flake tells it well. The book serves as a mirror for those who have suffered sexual abuse or trauma of any kind as well as a window into the lives of people who have experienced homelessness and poverty. The reader leaves feeling not pity but understanding and an admiration for the resilience and effort exerted by trauma victims. It acts as a call for all to refrain from rash judgements and to be kind. Char’s second escape from Anthony seems contrived (would the driver wait for Char as she says good-bye to Maleeka?); however, readers will be rooting for the happy ending. 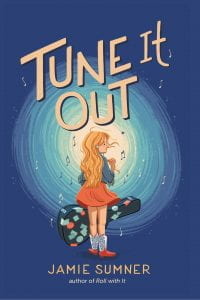 Lou doesn’t like crowds. She doesn’t like loud noises. She doesn’t even like high fives and definitely hates anyone touching her. Unfortunately for Lou, avoiding all of these is difficult when her mother wants Lou to use her singing talent to take them away from their life of coffee shop singing gigs and dead-end waitress jobs to the bright lights and jet-setting life of Los Angeles that would come with a singing contract. And they almost made it. The trip to LA was planned for Friday, but the accident happened on Wednesday, and now Lou was separated from her mother and sent to live with her aunt and uncle, people she barely knows. But she has her own bedroom there. Clean clothes, food whenever she’s hungry, and a private school to attend.  Lou’s worked hard her whole life to hide what was inside her. Will this new life give her the opportunity to face the truth about the life she and her mother were living and about the diagnosis that could change the way she feels about herself?

THOUGHTS: Sumner gives the reader a lot to unpack in a tight 275 pages–homelessness, poverty, foster care, and a sensory processing disorder, but it never feels unrealistic or overdone.  Readers will root for Lou as she makes her way in the world. 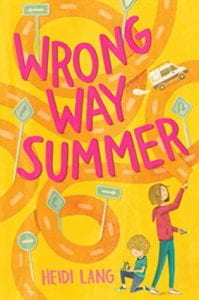 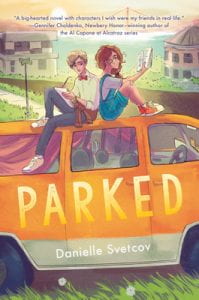 Jeanne Ann loves books, watching her mom cook, and normalcy. But when her mother suddenly quits her job and moves the duo across the country to San Francisco, life is anything but normal. Forced to live in their orange van named the Carrot, Jeanne Ann struggles with her mother’s lack of a job all while worrying about school starting in the fall. Cal lives across the street from the parked van and has recently been kicked out of school after graffiting an image on a courtyard wall. Curious about his new “neighbors”, Cal tries to help Jeanne Ann in various ways. The two slowly become friends and Cal tries to get Jeanne Ann to enroll in the middle school he will attend in the fall. But with the local beautification committee trying to get rid of the line of vagrant parked vans on the street, time is running out for both of them.

THOUGHTS: This debut novel from Danielle Svetcov does a wonderful job weaving a story together of two “troubled” teens while delicately addressing homelessness. Middle school students will enjoy the story and connect with the themes of friendship, family, and self-acceptance.