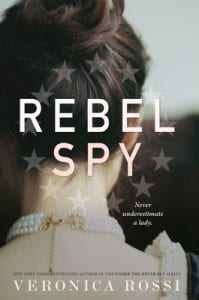 When Frannie Tasker’s abusive stepfather announces it is time for her to take her dead mother’s place in the household, she knows she has to escape her brutal life with him as a salvage diver on Grand Bahama Island. Fate intervenes by way of a fatal shipwreck, and a dead young woman who looks similar to Frannie. A quick change of clothes, (and a bout of “trauma-induced” mutism until she can polish her vocabulary and manners) and she becomes Emmeline Coates, wealthy British heiress on her way to America, during the height of the Revolution. She gradually adapts to her new life, family and friends, and even catches the eye of a handsome British officer. But a chance encounter with American rebel Asa Lane, who befriended Frannie on the voyage to New York and coached her in the ways of society women, shakes her out of her comfortable lifestyle. Utilizing her position in Loyalist society, Frannie begins spying for the Americans, passing along information she overhears during teas and dinner parties. But spying is a dangerous game,and Frannie is risking everything, including her new life and persona. Will Emmeline, or Frannie, survive? Based on the unknown identity of a member of the famous Revolutionary War Culper spy ring, Rossi creates a story for female agent 355. Meticulous research brings to life events of the war, many less familiar than those learned in history class, highlighting the little-emphasized contributions of women patriots.