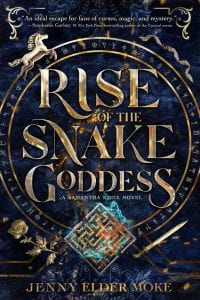 Desperate to be a part of the prestigious archaeology program at the University of Chicago, Sam Knox embarks on an impulsive trip to the island of Crete. The clues she deciphers lead her to the legendary girdle of the Snake Goddess. Triumphant with her find, Sam plans to use this find as proof she deserves to be admitted to what has always been a “boys club.” However, before she can show her misogynist professor her find, the girdle is stolen and a series of catastrophic earthquakes suddenly begin to hit the island. Sam and friends Joana and Bennet Steeling must find the thief and return the girdle to its rightful place before the magic of the Snake Goddess is fully released upon the island and the world. As the chase brings them deeper into Cretian and Minoan mythology, deadly encounters with legendary creatures abound, including the infamous Minotaur.

THOUGHTS: This is a fantastic follow up to the first Samantha Knox title, Curse of the Specter Queen. Readers will enjoy the friendships, light romance, and adventures that mark popular YA fiction. A quickly-paced novel paying homage to Indiana Jones and The Mummy movie series, Snake Goddess takes readers through the legends of Knossos and Crete while infusing the story with a touch of magic. Knox herself is tempted by the magic of the Snake Goddess, but the story takes readers on an adventure through archaeological digs, swanky boat parties, and the legendary labyrinth. 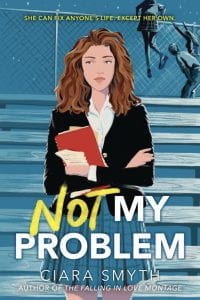 Aideen Cleary has problems. She’s not doing so well in school, her best friend Holly has been drifting from her for the last couple years, and her mom’s occasional drinking binges that make her unfit to parent have Aideen worrying that social services will come knocking on their door any day now. But when she catches her enemy, Meabh Kowalska, throwing an embarrassing hissy fit in the locker room at school, she sees an opportunity to focus on someone else’s problems for a change. Aideen thinks over-achieving Meabh’s problem of just finding more time in her schedule is an easy problem to fix, but Meabh insists on a fool-proof solution. So she asks Aideen to push her down a set of stairs in exchange for a favor she can call in at any time. Though Aideen hesitates at first, given their history, Meabh is pretty easily able to convince Aideen to give her a good shove. Meabh’s ankle effectively sprained, the problem seems solved. Except for the witness to it all, a classmate named Kavi, who swears to secrecy but sees potential in the exchange he just witnessed. The next day, he brings Aideen a friend of his in trouble and asks her to help solve the problem, much like she did for Meabh yesterday. Thus begins Aideen’s semester of stunts, shenanigans, and some new relationships. Aideen’s life might be spiraling out of control, but fixing others’ lives and collecting favors in return seems like a good deal for her. For now.

THOUGHTS: Aideen is foul-mouthed but laugh-out-loud funny in this sophomore novel from the author of last year’s The Falling in Love Montage. Some Irish colloquialisms might trip up teen readers here and there, but it’s part of the experience of reading this story set in Ireland. A story with romance though not necessarily a book I’d classify as romance, I highly recommend this book for YA collections looking to add  LGBTQ+ representation. Aside from a couple sentences mentioning Aideen’s coming out at a young age as difficult, the characters in this book are, as Aideen says, “super woke,” so this book is not about Aideen’s struggles coming out or dealing with bullying because she identifies as lesbian. Her fading friendship with Holly and budding new friendship with Kavi takes just as much (if not, more) of the narrative as her slow-burn enemies-to-lovers relationship with Meabh. Aideen’s complicated relationship with her mom and her mom’s alcoholism and poverty also dominate much of the narrative. While cliche, it’s definitely accurate to say this book has a bit of everything.