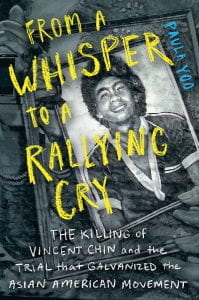 Journalist Paula Yoo employs the device of Jarod Lew’s connection with the brutal murder of Chinese-American Vincent Chin in 1982 Detroit to reveal the timeline and details of the landmark event. Lew discovers his mother was the grief-stricken fiancé of Chin, and Yoo uses his discovery as a way to connect the reader with the present—another time where racism against Asian-American/Pacific Islanders (AAPI) has surfaced. Lew’s narrative appears intermittently while the remainder of the narrative non-fiction work lays out the altercation, aftermath, and legal ramifications between the groom-to-be Chin and Ronald Ebens, an autoworker supervisor and his adult stepson, Michael Nitz. The only son of Chinese immigrants, twenty-seven year old Vincent Chin was a go-getter out for a bachelor party with his pals before his June wedding to Vikki Wong when he encountered Ebens and Nitz at a strip bar. The two groups exchanged heated words and engaged in a brawl that got them ejected from the bar and continued into the night. Ebens retrieved a baseball bat from the trunk of his car, searched with his stepson for the group, and eventually ambushed Chin and beat him to death. Though Ebens and Nitz were arrested and tried for second-degree murder, they received the light sentence of only a $3,000 fine and probation, shocking Chin’s widowed mother, Lily Chin, the Asian American community of Detroit, and many others. Yoo recounts the original hearings, the court proceedings, the arguments of both the defense and the prosecution, and the observations of the young police officers first on the scene. Though Ebens and Nitz could not be tried a second time for the same crime, the mishandling of justice empowered the Asian-American/Pacific Islander community to form the American Citizens for Justice (ACJ) and take a firm stand protesting for their civil rights to be upheld. Their efforts instigated a federal grand jury to indict the pair with interfering with Chin’s civil rights. Told in straight-forward style, Yoo maintains her objective view, balancing the outrage AAPI felt about what they perceived was a hate crime with the protestations of the accused to the contrary. The context of the murder is the fallout from a once prosperous city decaying chiefly because its main, lucrative industry—cars—has been usurped by Japanese companies. The particulars of the initial dispute between Ebens and Nitz and the victim, Chin, may never be known; but Yoo records all the iterations as the years go on and memories shift. Even the perpetrators admit it was a senseless act, fueled by drunkenness and intense anger. The author makes clear the murder and what followed was instrumental in making AAPI stand up for their rights, but whether or not the attack was racially motivated can be sorted out in the readers’ minds. Includes timeline, extensive notes, index, photographs.

THOUGHTS: Written in narrative non-fiction style, From a Whisper to a Rallying Cry. . .reads like a court drama. Yoo provides background on the major players, but is true to the script. She is even-handed giving both profiles of Chin, Ebens and Nitz, and the involved legal teams from both sides. The handling of the case from the beginning smacks of white privilege, but Yoo just lays out the facts and remains unbiased. The facts, too, shift depending on who tells them and what year they are told (the murder happened in 1982 but appeals lasted until 1987). This important book contains plenty of material for discussion; but for personal reading, the heavy topic may make the book more suited for more sophisticated readers.

On June 19, 1982, in Detroit, Michigan, Vincent Chin, an Asian American, was beaten by Ronald Ebens, a white man, with a baseball bat. Chin died from his injuries. This is a fascinating look at the time and place surrounding this event and their impact on the reactions of the people and the community involved. This book takes readers through the event and the trials following. It also describes the impact on the Asian American community and their reaction. The despair, the outrage – and ultimately, the activism that developed as the Asian American and Pacific Islanders Communities found their voice and their purpose. Wrapped around this story is the tale of Jared Lew, his discovery of the event and his connection to Vincent Chin. This is Jared’s tale of how he found out the story of the cataclysmic event that triggered the voice of the Asian American community and how this event connected him to his family and his heritage. The book presents an in-depth look at the people affected by Mr. Chin’s murder and the fallout in the community and across the nation.

THOUGHTS: This is a fascinating look at a time period and a set of events that are not well known to most people but are pivotal for the Asian America and Pacific Islanders Community. Recommended for high school libraries who want to broaden their appeal to minority groups.