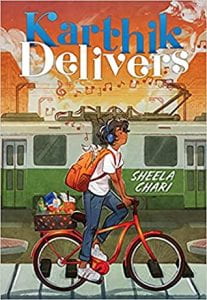 The 2008 recession has hit Alston, Massachusetts, hard. The Raghaven Indian grocery store is not doing well, so Mr. Raghaven recruits thirteen-year old Karthik as a delivery boy, a perk for his customers during the sweltering summer months. Remembering the orders is simple for Karthik; in fact, he remembers everything, including the 50 ice cream flavors at Carmine’s where he and his best friends, Miles, a white crossword whiz, and Binh, a sensitive Vietnamese boy, hang out when they can. At Carmine’s, Karthik also can catch a glimpse of Juhi Shah, his crush, despite her puzzling affinity for brawny bully Jacob Donnell and his wing man, Hoodie Menendez. This summer before high school becomes one of challenges for Karthik: can he stand up to Jacob who addresses him as Kar-dick; can he resist his mother’s pressure to be a doctor; can he help his father’s store withstand the stiff competition of the popular take-out place, House of Chaats (Juhi’s family business); most of all, can he discover what he truly wants to be? When Boston University budding playwriting student Shanthi Ananth persuades Karthik to take a leading role in her twenty-minute play about a childhood incident in the life of Alston native and world-renown composer and conductor, Leonard Bernstein, Karthik’s world changes. Like Bernstein, whose musical career started with the gift of a piano from his aunt, Karthik realizes he has some unmined talents as well. His delivery job shows him he has a gift for making people feel noticed and listened to; his relationship with Shanthi encourages his talent for acting and reveals that it is possible to follow one’s own heart’s desire, not one’s parent’s.  The only problem is, he has to keep this project a secret. Against the backdrop of hard financial times, Karthik juggles all the different aspects of his life–family, friends, acting, job, first love–with an authenticity that will touch readers. Chari’s writing, whether in narrative or action or plot movement, makes this story so real. Though the Raghaven family and other characters suffer some bumps in life’s course, they retain their senses of humor and compassion, giving the story a buoyancy and truthfulness. This novel immerses the reader in a diverse community, strong friendships, and the sacrifices made for family.

THOUGHTS: Chari has a gift for developing rich major and minor characters. Students may draw parallels between the recession happening now in 2022 and the financial crisis of the early 2000’s that Karthik’s family experiences. Characters are of different ethnicities, but Indian foods and dishes as well as customs and mores are dominant. Karthik’s play, Being Lenny, may pique interest in Leonard Bernstein, his life and works. 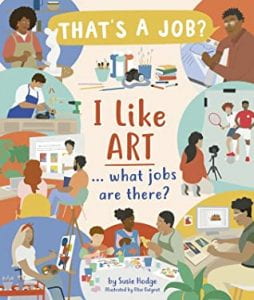 That’s a Job? I Like Art…What Jobs Are There? is a nonfiction book that uses the lens of art to showcase over twenty different jobs that are all related to art. There is a wide range of jobs, from ones that require working with people to jobs that are more solitary. Some of the jobs show a life in the day of the person, and some just give a smaller snapshot of what they do in a day. Each job discusses the best and worst parts of each job. At the end of the book, there is a way for the reader to try to pick out their best job, based on what they like to do/are good at.

THOUGHTS: This is an amazing book to introduce different careers to readers, and I loved how in-depth they went for the behind the scenes of each career. The illustrations show each career as well as the extra hobbies each individual has. Must have for an elementary or upper elementary school. 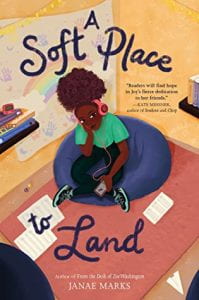 The Taylor family is going through a rough patch. Twelve-year old Joy’s father was laid off, they had to sell their beloved house and move to a small apartment, cut out all non-essential expenses like Joy’s piano lessons, and change Joy’s middle school. Bad enough her dream to be a film composer has to be put on hold and her old friends are not reaching out to her, but her parents are arguing now, and Joy feels she has to keep her feelings hidden to shield her little sister, Malia. The silver lining is the friendliness and kindness of the residents of her apartment building, from next-door neighbor, elderly Mae Willoughby and her French bulldog, Ziggy, to aspiring film-maker Nora, Joy finds a warm welcome and a ready ear that softens the edge of her disappointment and anxiety over losing her house and fearing her parents will get a divorce. Other perks of apartment living are the secret hideout where Joy and her new-found friends can get away to draw, listen to music, read, or play board games, and the dog walking business Joy starts with Nora to earn money to purchase a piano. When Joy’s parents tell the girls that her father is moving in with Uncle Spencer for a bit, though, a distraught Joy runs away to the Hideout and falls asleep, leading to the breaking of the one Hideout rule: don’t tell the adults. Though the other kids are angry that their Hideout is now off limits, Nora remains a loyal friend until Joy’s curiosity about a poignant poem and messages on the Hideout’s walls leads to a rift between them. When Nora ditches the dog walking session, Joy finds out too late she cannot handle the task solo and loses Ziggy. Despite her loneliness and sense of failure, Joy works to come up with a way to find Ziggy, mend her friendship with Nora, and remedy the loss of the special Hideout. Janae Marks’s new novel abounds with positivity while recognizing life does not go perfectly. Joy and her family are African American; most of the other characters are people of color also.

THOUGHTS: A comforting, relatable middle school read. No high drama here, just an enjoyable story showing people bonding together and helping each other, and middle school students being kind and friendly to newcomers. Although there are some difficult issues at play here, all the adults are experts at problem solving and dealing with hard things respectfully. The children follow suit. Joy and Nora show a lot of responsibility and initiative, and the other characters display other positive traits.