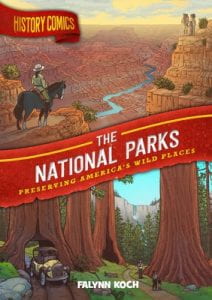 A friendly Sasquatch is our guide through The National Parks, a recent entry in First Second’s History Comics series of graphic nonfiction for middle grade and teen readers. Today, our parks and national monuments successfully blend tourism with conservation of unique ecosystems (as well as history), but getting here was a circuitous path. When Congress established the National Park Service in 1916, it was in charge of thirteen national parks. Today the National Park System encompasses over 60 national parks and hundreds of additional federal park sites. In this conversational history of “America’s best idea” to preserve our wild places, author and illustrator Falynn Koch colorfully portrays the visionaries, politicians, Native Americans, wildlife, and occasional scoundrels who contributed to the evolution of our park system. She also addresses the forced removal of indigenous people from land that would eventually be parks: “If we don’t reexamine the past and face these grim truths, we can’t learn from them and make a better future” (92).

THOUGHTS: Rich with historical anecdotes and images of our varied parks, this one will have readers thinking, “The mountains are calling & I must go” (~ John Muir).