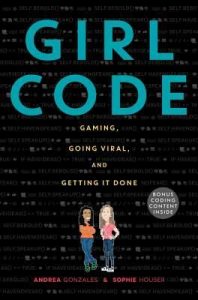 Teenagers Andrea “Andy” Gonzales and Sophie Houser met at a summer camp called Girls Who Code, where they teamed up to create a video game called Tampon Run.  Much to their surprise, the video game became wildly popular, solidifying their celebrity status in the tech world.  This book, told in alternating perspectives between Andy and Sophie, gives readers an inside look into their lives, beginning before the invention of Tampon Run and continuing with the impact the game had on their lives after it went viral.  By the end of the book, the girls are heading off to college and sharing their hopes and aspirations for the future.  Also included in the back of the book is a coding appendix that provides readers with coding basics.  A solid addition for any school looking to add to their STEM collection.  THOUGHTS: I felt this title was geared more towards girls than boys.  Not only were there many details included about the menstrual taboo, but there were many references to the lack of female coders in the tech field.  These messages are empowering for young girls who wish to make the topic of menstruation less taboo or who wish to work in the STEM field, but may not speak as strongly to boys.  Pair this title with Reshma Saujani’s New York Times bestseller, Girls Who Code: Learn to Code and Change the World. 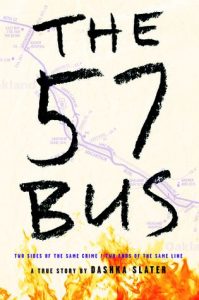 In November of 2013, teenagers Sasha and Richard didn’t have much in common. Sasha attended a small private high school, had a small circle of supportive friends, and identified as genderqueer (preferring they/them pronouns). Richard attended large, public Oakland High School and had already spent a year in juvenile detention. Their lives overlapped for a few short minutes each day on Oakland’s 57 bus. One afternoon, while Sasha was napping in the back of the bus, Richard flicked a lighter near Sasha’s skirt. It erupted in flames and left the teenager with second and third degree burns requiring surgery and months of rehabilitation. Sixteen-year old Richard, who admitted to being homophobic in a police interview, faced a potential life sentence if he was tried as an adult with a hate crime enhancement. Author Dashka Slater takes a remarkably even-handed look at the two young people, the crime, their respective support systems, and role of the justice system in what happened next. In particular, she examines whether a teenager can ever truly act as an adult, and whether adult prisons are an appropriate place for juvenile offenders to serve their sentences.  THOUGHTS: While not a typical true crime story, The 57 Bus is an extremely compelling portrayal of a hate crime and its aftermath. The author deftly illustrates how gender is not always binary, and neither is right/wrong, guilty/not-guilty, just/unjust.

Sasha, an asexual white teen from a middle-class background who attended a small private school in Oakland, California, was napping on the 57 bus one afternoon when Richard, an African American teen from a poorer neighborhood who attended a large public school, made the rash decision to light Sasha’s skirt on fire. The skirt went up in flames, and Sasha was hospitalized with severe burns while Richard was arrested and charged as an adult for committing a hate crime. Using interviews, documents, letters, videos, diaries, social media posts, and public records, the author pieces together the entire story in a very impartial manner.  Beginning with the incident itself and then backtracking to provide information on Sasha’s and Richard’s backgrounds, the second half of the book is dedicated to the outcomes and aftermath of the incident. This excellent title raises many timely questions about gender, race, class, hate crimes, and the justice system, and it, therefore, deserves a place in every junior and senior high school. THOUGHTS: Potential uses for this book in an educational setting are boundless.  It could be paired with other outstanding titles like Angie Thomas’s The Hate U Give or Nic Stone’s Dear Martin to explore the issues of race and justice.  Social studies teachers may choose to have students read this book and then write a response declaring whether or not they felt justice was ultimately served and why.  Alternately, a mock trial could be set up requiring students to use evidence from the book to defend either Sasha or Richard. The insightful discussions this book could spark about hate, impulsiveness, and forgiveness are sure to stick with students long after they have finished reading it.