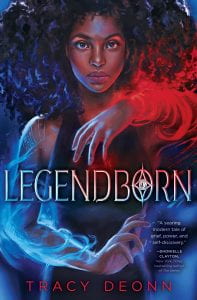 Briana Matthews tries to get her life together after the tragic and sudden death of her mother, but she does not get off to a great start. On the night before classes in the Early College program at UNC Chapel Hill, she and her best friend Alice attend a cliff-jumping party at a quarry off-campus. There, she encounters Selwyn Kane and experiences odd sensations at his touch, sees Selwyn and another girl destroy a fiery silver mass floating above a drunken fight that breaks out, and overhears bits of mysterious conversation: mentions of magic, King Arthur, and Legendborns. She also has the strange sensation that Selwyn is trying to erase her memory of the sight of the fiery mass that night. When the cops show up to break up the fight, though, Bree has more important things to worry about now that the Dean is threatening to throw her out of the program. She is granted a second chance… and a peer mentor to keep her out of trouble. Turns out that Nick Davis, her peer mentor, only brings more trouble. While walking together on campus, Nick and Bree are attacked by a green-lit wolf-like creature, similar to the one she saw the other night with Selwyn, and Bree is unwillingly pulled into a secret world of which Selwyn and Nick are members. Though she’d love nothing more than to move on from these strange events, memories from the days after her mother’s death start resurfacing, and Bree comes to the startling conclusion that answers to mysteries surrounding her mother’s death might be found within the world of the Legendborn. Now, Bree must decide if joining the Legendborn at the brink of a war is worth finding the answers she seeks.

THOUGHTS: The first book in a series, this urban fantasy puts a new, modern spin on the Arthurian legend with a contemporary setting and characters and by interweaving African American spiritual traditions into the magic. Deonn has created a captivating world and mythology that fantasy readers will surely love. She also tackles serious issues such as grief, trauma, racism, and sexual violence throughout the book. This is a must-have for YA Fantasy collections.