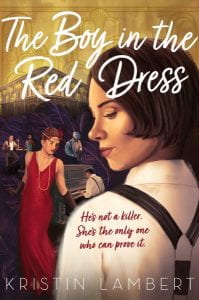 It’s New Year’s Eve, 1929 in the French Quarter, and Millie is running her Aunt Cal’s speakeasy, the Cloak and Dagger, while she’s out of town. Running a speakeasy during prohibition is dangerous enough, but the Cloak and Dagger’s entertainment includes drag shows, and the patrons are primarily from the LGBTQ community, making it doubly scandalous by 1929’s standards. The employees and patrons take care of each other though, and Millie, who is bisexual herself, would love nothing more than if her Aunt would let her quit school and help her run the place. This New Year’s Eve, she thinks, might be her chance to prove herself. But then a group of high-society newbies show up to the Cloak and Dagger, and one of them starts looking for a boy from her past she’s showing in a photograph, a boy who looks an awful lot like Millie’s best friend, who now goes by Marion and is the “undisputed queen of the Cloak and Dagger.” After Marion’s big performance at midnight, the girl – Arimentha – is found dead in the alley, apparently pushed off the balcony near Marion’s dressing room, and all the evidence points to Marion as the murderer when details emerge about their past. Millie knows her best friend is not a murderer; she just has to prove it to everyone else. As if solving a murder mystery isn’t complicated enough, Millie’s mostly-absent mother reappears forcing her to deal with some repressed feelings, and throughout her quest to clear Marion’s name, she also finds herself romantically interested in both Bennie – the son of one of their bootlegged alcohol suppliers – and Olive – a waitress at the Cloak and Dagger.

THOUGHTS: This is a fun, different kind of LGBTQ tale given the time period. Though primarily a mystery, the novel has lots of layers including a love triangle that is good but very much a sub-plot that doesn’t take over the primary storyline. Touches on the history of the time period, but at its heart, this murder mystery is just plain entertaining with a likeable cast of outcast characters, even Millie’s flawed mother. Highly recommended for collections where patrons can’t get enough LGBTQ.