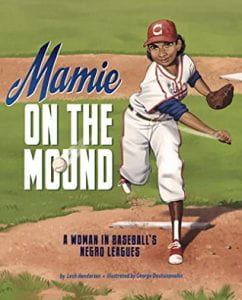 “‘I was a ballplayer. This is what I was and this is the way I want to be known, a ballplayer,’ Mamie “Peanut” Johnson.” Mamie Johnson grew up playing baseball with her uncle Leo, who was close to her age, starting at the age of 6 on the family’s farm in South Carolina. She moved several times over the years, but love for the game remained a constant in Mamie’s life as she earned spots on several boys’ and mens’ teams over the years. After graduating high school, Mamie attempted to try out for the All-American Girls Professional Baseball League, but was denied a try-out because she was black. Instead, Mamie went to play professional ball for the Negro Leagues Indianapolis Clowns team and spent three seasons traveling through Canada and the US (including the heavily segregated South) playing baseball. In 1955 she retired to return to her husband and young child, but her love for the game continued. Author Leah Henderson’s Afterword tells readers that Mamie was honored by Presidents Clinton and Obama and helped clear the plate for other female baseball players.