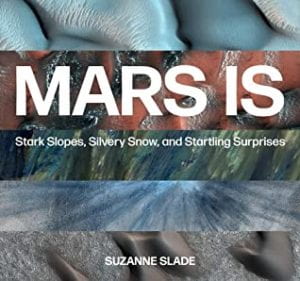 Sand dunes, craters, volcanoes, canyons, lava flows, cliffs, and ice are only some of the amazing landforms covering the surface of Mars. In this oversize book, each double page spread consists of a full-page landform photo that is complemented by large-scale descriptive text and a smaller, more detailed caption. One spread features “sandy, windswept dunes” and describes how Mars’s winds blow the sand into mesmerizing ripple and wave patterns. Another highlights the “stark slopes” of an impact crater formed by an asteroid or meteorite collision. The full-color images in the book were taken with NASA’s HiRISE (High Resolution Imaging Science Experiment) camera. The camera was launched into space in 2005 and has been sending images back to Earth ever since. Detailed backmatter include sections titled “Launching the Mission to Mars,” “HiRISE: The Spectacular Space Camera,” “More About Mars,” and “Highlights of the Exploration of Mars.”

THOUGHTS: This title is reminiscent of April Pulley Sayre’s books which present brief and poetic nonfiction tidbits complemented by beautiful full-page photographs. Although there is not enough information in this title to support research reports, students will be drawn in by the breathtaking photos of the Red Planet. It also will be useful as an introduction to science units about the solar system and outer space. 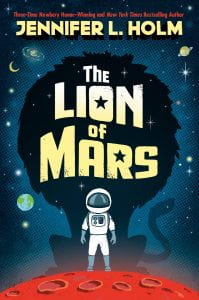