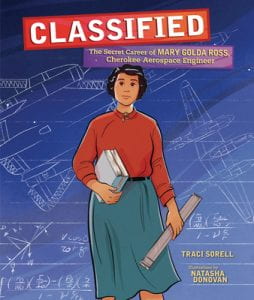 Mary Golda Ross’s work as an aerospace engineer on several classified projects broke barriers not only for women but also for Native Americans. Many of the projects she worked on at Lockheed Aircraft Corporation remain a secret even today. Mary’s love of math, her motivation to pursue a well-rounded education, and her courage to secure a career in a male-dominated field earned her the respect of people around the world. During World War II, she worked on a team that improved the safety of the P-38 Lightning fighter plane. As Lockheed’s first female engineer, she recruited other women to the field. In the 1950s, while the Space Race between the United States and the Soviet Union raged, Mary was one of 40 engineers recruited to work on top-secret aerospace projects. Additionally, her research about satellites and space travel ultimately contributed to the Apollo mission to the moon. Although her work drew national and worldwide attention, Mary never sought the spotlight. Her humble nature and quiet leadership blazed a trail, and throughout her lifetime, she never stopped encouraging young women and Native Americans to study math, science, and engineering. A note at the beginning of the book outlines several Cherokee values Mary’s family instilled in her, including gaining skills in all areas of life, cooperating and working well with others, humility, and helping ensure equal education and opportunities for everyone. Backmatter includes a timeline of major events in Mary’s life, an author’s note, and more information about the Cherokee values highlighted in the text.

THOUGHTS: This title is well-suited to STEM units as well as to units about female trailblazers. The backmatter spotlighting Cherokee values mirrors many of the soft skills schools emphasize today, so there are opportunities for discussion and connections. Pair with Margot Lee Shettterly’s Hidden Figures: The True Story of Four Black Women and the Space Race.